If you take the astrological zodiac signs and turn them into teenage girls you get the Star Darlings, a new book series from Disney Press that is perfect for middle school aged kids. Each book begins with a breakdown of all twelve girls. Like a description of each astrological sign, it lists the strength and weaknesses of each Star Darling. It's a handy reference tool because while each book focuses on a different character, twelve is a large ensemble and you can quickly forget who the other characters are.

Starlings live in Starland, another world out there in space. Their whole world is powered by wish energy, which they harvest by granting wishers to the people on Wishworld. But in order to learn how to do this, they must attend Starling Academy. In the beginning of the first book, Sage and the Journey to Wishworld, Starling Academy announces a pilot program that will allow students to use their newly acquired skills on Wishworld before their training is complete to see if granting wishes of adolescent wishers will yield more energy. The first book focuses on Sage, who represents Sagittarius. Through her, we get introduced to Starling Academy and a handful of the other Star Darlings. She is the first one sent to Wishworld and she soon discovers that not only is it difficult to identify the wisher you're looking for, but also what the wish truly is.

The second book flows a little better now that the rules have been established in the first book Libby and the Class Election focuses on Libby (Libra) and her struggles with her roommate. Starling Academy is having auditions for a band and she really wants to be part of it, but her performance dreams have to wait when she gets assigned the next mission, which finds her helping a wisher who is struggling with her school's class election. Is her wish to simply win, or is there more to it? The best part about the series is the way the Star Darlings grant wishes. It's not as simple as snapping a finger and their efforts are things real kids can actually do to improve the quality of life within their schools. Both feature important lessons in friendship and how to include everyone, plus a positive anti-bullying message. The main characters are relatable because they have their own problems on Starland that mirror their missions on Wishworld.

Star Darlings will instantly engage young readers with a proclivity for sparkly and pretty things. The Starlings all have colorful, shimmery hair and their skin is glittery. When they travel to our world, they have to change their appearance and the inside back cover features a full color illustration of their Wishworld disguise. In a way, the books remind me of Zenon: Girl of the Twenty-First Century which found an out of touch teenager who grew up in space back on earth struggling to relate to earth. For readers who end up wanting more, Disney isn't limiting Star Darlings to just books. In addition to apparel, a doll line has been created from the members of the Star Darlings band and there is even a single available of their first song, "Wish Now," along with an animated music video. I now wonder what Disney's endgame is with this series. The last time their was such a marketing push around a Disney book series, it was the Disney Fairies franchise which evolved into movies. I could totally see Star Darlings as a TV series on Disney Channel if this takes off. 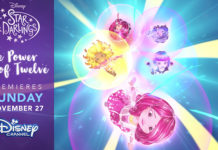 Star Darlings: The Power of Twelve to Premiere on Disney Channel 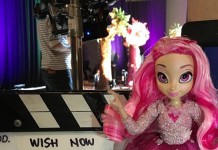 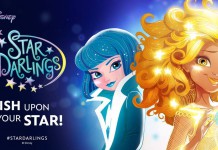