Welcome fellow Tsum Tsum-aholics to 2016! First impression: It feels a lot like 2015 with one tiny exception. This month's Tsum Tsum Tuesday wasn't as disastrous as they usually are. Disney either overestimated demand for The Lion King collection, or they made enough to not cause a midnight launch frenzy. It's been two full days since the release and only three plushies are sold out (Mufasa, Scar and Ed). That's right, if you're reading this at the time of posting, you can still order Simba, Nala, Timon, Pumba, Rafiki and Zazu. It's okay if you wan't to let out a gleeful "NAAAAAAANTS INGONYAMA!!!" as you click "Add to Cart," that's what I did at midnight on Tsum Tsum Tuesday.

The Price of Tsum Tsums

Disney Store is celebrating their new line of Tsum Tsum plushies with some limited release t-shirts. There are four themed to The Lion King available in a gender neutral cut, as well as two Valentine's Day shirts for women. Each shirt is priced at $29.95, but there's a deal when you buy two that brings each shirt down to $22. I can't wait to wear my Lion King Tsum Tsum shirts with pride. While we knew that The Lion King collection was coming on Tsum Tsum Tuesday, Disney surprised everyone with two Valentine's Day releases. The first sold out lickity split, Mickey Mouse as an angel and Minnie in her V-Day finest. But if you believe that "Life is like a box of chocolates," than you might also apply that to Tsum Tsum. Still available is a box of Tsum Tsums wrapped as chocolates to give to your sweetums this February 14th.

I believe the concept of the Valentine Candy Box is that it's a collection of Disney sweethearts paired together in candy wrappings. Mickey and Minnie plus Donald and Daisy are legitimately couples. Then there's Pooh and Piglet, two best buddies???.... or more??? And lastly, Chip and Dale. Disney has never officially stated the nature of their relationship. Brothers? Cousins? Roommates? Lovers? Well, regardless they are paired together in this delicious celebration of love that doesn't discriminate.

May the Shellie Be With You

If you've been following my Tsum Tsum Life blog since the beginning, then you know that I derp hard over all things Durfy the Dusney Burr (translation: Duffy the Disney Bear), including his girlfriend ShellieMay who made her U.S. debut last fall (I still haven't come down off my high from this epic moment in history). And now, my mini and medium Duffy Tsum Tsums no longer have to be lonely. Disney Store's other big surprise on Tuesday was the release of ShellieMay in mini for $6.95 ($1 more than average, but she's worth it) and medium for $14.95 ($2 more than average, also totally worth it). It's a Valentine's Day miracle!!!

I've said it before and I'll say it again, never pay second market prices for Tsum Tsums because you never know where you'll see them next. In 2015, Target started carrying Tsum Tsums and Disney recreated many of the previously sold out collections just for them. Now JC Penney has become the second nationwide chain to hop aboard the Tsum Tsum train. The entire non-winking Mickey and Friends collection is available, as are Lady, Marie, Dumbo and Stitch. Two of the four 101 Dalmatians characters (Spot and Lucky) have popped up, as have the majority of The Little Mermaid collection (every character except Prince Eric). They also have some medium and large plushes, including Olaf from Frozen. It's a perfect opportunity to pick up some Tsum Tsums you might have missed out on through Disney Store. (Note: JC Penney lists medium plushes as "small," but they are the same 3.5 inch size as mini). 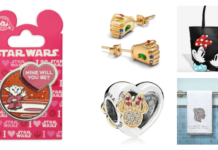