Walt Disney Records' The Legacy Collection continues with its ninth entry, Walt Disney's classic Cinderella. The songs are iconic and "A Dream is a Wish Your Heart Makes" instantly became the second anthem to represent Disney as a whole (the first is "When You Wish Upon a Star"). To celebrate the 65th anniversary of the film, the soundtrack is receiving the deluxe treatment. For the first time ever, this release is available on both CD and digitally on the same date (the digital releases have previously been delayed at least a month from the physical release)

Like the previous Legacy Collection releases, Cinderella features the complete soundtrack to the film in story order. The contents of disc one were previously available on releases from 1997, 2005 and 2012. The complete score and songs from the film are available across the ten tracks. The music is gorgeous and the restoration was well done. I had hoped that the producers would at least go back and further split the tracks with gapless playback, as this would make it easy to navigate to select musical moments (the longest track is almost ten minutes long).

Disc two features The Lost Chords, all of which were previously available as a digital album and as a bonus disc with the soundtrack's 2012 release. Seven songs that were unused are presented as both original demos and newly recorded tracks. The songs featured are "I'm in the Middle of a Muddle," "I Lost My Heart at the Ball," "The Mouse Song," "Sing A Little, Dream A Little," "Dancing on a Cloud," "The Dress That My Mother Wore" and "The Face That I See in the Night." Some of these songs were featured on the Platinum and Diamond Edition home video releases with storyboards from the full scene. A few of them are quite memorable, but my favorite is "Sing A Little, Dream A Little." Disc two features nine additional tracks, listed as "Bonus Tracks," making this disc more than just a clone of the second disc from the 2012 release. The booklet makes no mention of where these songs came from and they are highlights from the score re-recorded with more modern technology. A little research revealed that these tracks are from a 1995 release that Walt Disney Records did to celebrate the film's 45th anniversary. Walt Disney Records' The Music of Cinderella featured all of the songs from the film performed by contemporary artists, such as Linda Ronstadt and Bobby McFerrin. The rest of the disc was filled with re-recorded score and those non-singing tracks are what fill up the rest of this disc.

This release is housed in the standard Legacy Collection digipack case. The booklet is broken up into four sections. The first is written by Disney historian Paula Sigman-Lowery and covers the development of the songs and the voices that were cast. The second section, "The Lost Chords" by Russell Schroeder, is copy/pasted from the digital book that came with the digital release of these songs in 2012. The third section features lyrics for all of the songs from the film and the final section features development art from the film's production with explanations by Dave Bossert. All of the artwork is by Lorelay Bove, keeping the same style consistent across all of the releases so far.

How does Cinderella compare to the other releases in The Legacy Collection? It ends up being one of the better efforts, even if most of the work was already done. If you bought any of the previous three soundtracks, you already own the contents of disc one. If you bought the 2012 2-disc set or the digital Lost Chords, than you already have half of disc two. And if you've been collecting Disney music since 1995 and still have your Cinderella tribute album, than there isn't a single song on this release that you don't already own. But if you've never owned the soundtrack to Cinderella before, this is the best one to get. The only other reason to own it is for collector's of The Legacy Collection to complete their set. 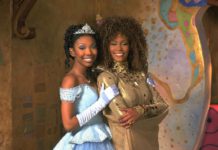