Welcome to the first issue of "The Tsum Tsum Life" blog, a not-so-subtle rip-off of Kyle Burbank's "The E-Ticket Life" blog, which is in-turn based on his brand-new book (it is also called The E-Ticket Life). And with that, we begin. "Ready??? GO!!!"

August has been an epic month for playing the mobile game thanks mostly to the limited release of Sorcerer Mickey. The first weekend of the month was "Lucky Time" and despite saving up coins in preparation for a new release, I almost made it through that weekend without getting him. I stayed up late each night in a cold sweat, feverishly playing until my fingerprints wore off. I sacrificed commitments with friends, family, and my poor dogs nearly starved to death while I ignored them. Within the last few hours, elation took over as I finally got him! Oh, jes! Dis is living! Get! If you no get, you have until August 31st and then he goes bye bye. As always, there's that disclaimer that the limited release Tsum Tsums may return again someday and I hope they do. I've only been able to get once, but I'd love to see what he can do when he gets leveled up higher. And since I didn't get a single Holiday Tsum Tsum last year, I would lurve them to return this winter so I can get! I hope you get, too!

As a level one Tsum Tsum, unleashing Sorcerer Mickey's power allows you to tap the screen until his hats run out. He starts with just three hats, but I imagine the number of hats increase as he levels up. Unlike Donald Duck, when you tap as Sorcerer Mickey it treats it like popping a bubble, taking down all of the Tsum Tsums surrounding where you tap. And while his power is activated, the music becomes "The Sorcerer's Apprentice." YAAAASSSSSSS!

While the game makers don't always coordinate with the plush makers, they sort-of did this time around. A Sorcerer Mickey Tsum Tsum was unveiled at the D23 Expo as a surprise release along with other characters from Fantasia and he was available in mini, Medium and LARGE sizes! He was so cute! I managed to get the non-limited individual releases at that Disney Store, but didn't make it back for any of the others (if you need more info on why, open this can of worms).

Here he is in the limited edition box set, where Yensid and Hoplo were exclusive to the box while a limited number of the others were sold separately.

The box sets had an edition size of 2,000 while no numbers were put on the others. The sets sold out so quickly, the rumor is that only 500 were sold while the rest have been reserved for Japan's D23 Expo in November. So while eBay prices are astronomical now, they may decrease if the rumor is true. The other releases were Pinocchio and Steamboat Willie, both of which were le cute!

Another exciting announcement that came out of the D23 Expo is a new Tsum Tsum subscription service! I've been checking the website daily, but it still won't let me sign up. When I think about it too much, I feel weight on my chest and my mind runs through a million reasons why they aren't letting me at it. LET ME AT IT! So this set is $24.95 per month and gets you 1 small plush and an exclusive mini-version of that plush, to which I reply with "What's a small plush?" Because, you know, there's only three sizes: mini, medium and large. Like this: So now there's another one between mini and medium? All I have to say is that they better tell subscribers in advance which Tsum Tsum they're getting because it sounds like the small size is available for sale to anyone, but the mini is exclusive to the subscription. But again, bring it on. LET ME AT IT! And in all seriousness, stop saying "Comin' Real Soon" and put up a date because want. Get! REMINDER: Next Tuesday is Tsum Tsum Tuesday! This redonkulously cute The Nightmare Before Christmas set is wunderbar. These usually sell out fast online and in stores, but if you live near a Disney park they are usually easier to get there about a week or so later. If not, camp out online and wait for them to post so you can check out with lightning speed and don't forget the free shipping code. Ready? GO!!! 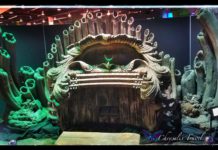 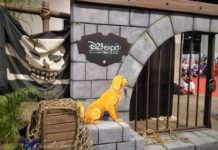 Yo Ho! Celebrating Over 50 Years of Disney Pirates at D23 Expo