This past week, one of my favorite events kicked off in Walt Disney World: Mickey's Not So Scary Halloween Parties. In addition to the enjoying the park with mostly minimal waits, getting to see incredibly creative costumes worn by other guests, the boatloads of name brand candy you acquire, and the amazing Boo To You parade (which ranks among my very favorite), perhaps what I appreciate most about the parties is their promise of "not so scary." In sharp contrast, this week also marked the return of Universal's Halloween Horror Nights — something I will never ever attend for as long as I can help it.

As it turns out, I have some weird issues when it comes to "scary" things. My biggest problem with most scary rides, events, and even movies is that what counts as a scare is really just a startle. It's like when someone sneaks up behind you, grabs your shoulders and then yells "BOO!" Do you really think that I was convinced there was a ghost behind me (and that ghosts say "boo"), or it is possible that I was reacting to an unexpected loud noise which, as I now know, was produced by someone I thought was my friend? See, I'm not the type of person who will watch a paranormal film, be haunted by it and not be able to sleep that evening; I just hate making a fool of myself leaping into the air with every jump scare they throw into modern horror films.

Even though Disney proudly carries the "not so scary" banner, there are still a few rides that make me uneasy in the Disney Parks and so I thought I'd share a helpful list, just in case you cared: Admission number one: I have never had my eyes open for an entire ride on Indiana Jones. This includes my trips to Tokyo where I forced myself to see the scenes that aren't in the Anaheim version, but none of the rest. Basically, I'm good from load-in up until just past when Indy yells at us for looking into Mara's eyes. Then I go dark until we get to the bridge — I have to get a view of that impressive room and the fire — and then close again before we get to the snake. It's not until Indy is hanging above us that I'm actually looking at our adventure.

Similarly, I've only been on Dinosaur in Disney's Animal Kingdom (the two have very similar ride systems if not identical tracks) a few times and have seen even less of that attraction. At least when I ride Indiana Jones, I have pretty much every effect and sound memorized. With Dinosaur, I just imagine there's always some t-rex in my face and, thus, wait for "YOU MADE IT!" to open my eyes. This unfortunately means that everyone can see my scaredy cat tendencies in the photo...

I'm not sure I've ever admitted this publically, but I don't think I rode Haunted Mansion until I was maybe 20. You'd think I'd have a little more trust that Disney wouldn't just do any old haunted house gag in their park, but still. Even though I now ride the ride frequently and love it, I do still have issues with the graveyard scene.

I've been told that the ghouls that spring up from behind the tombstones have been slowed way down over the years, but I seriously just cannot deal. Like Indy, I have the motion of the Doombuggy memorized and so I know when it's safe to open my eyes and see the singing busts. Otherwise, it's blackout from the time I see the gravedigger and his dog until I pass that archway to safety.

In my defense of thinking Disney might do a legitimately scary ride (besides Alien Encounter), for a short time, there was a knight in The Haunted Mansion that was actually a Cast Member and would jump out to startle guests. Oh heeecccckkkkk no! If I had ever been on the ride and that happened, I might never even set foot in New Orleans Square again.

Although it opened as just Snow White's Adventures, the addition of that extra adjective is warranted. This is easily the Disneyland Fantasyland dark ride I go on the least (despite the typically short waits) and never even went on the Magic Kingdom one, to my knowledge. Needless to say, Seven Dwarfs Mine Train is definitely my preferred Snow White attraction in the Parks.

Philharmagic,  It's Tough to Be a Bug, Finding Nemo Submarine Voyage, and Ellen's Energy Adventure

This is where it gets really bad.... Although I no longer need to close my eyes of plug my ears, there are small elements of these traditionally less-than-thrilling attractions that bother me. In Philharmagic, I always have to psych myself out for the popping champagne bottles since they can take you by surprise if you're not expecting the added physical effect. The first time I saw this film, I was not only startled by the first pop, but each subsequent one, culminating in a finale of faster pops. 🙁

It's Tough to Be a Bug (more like "It's Tough to Be a Kyle") is a little bit more understandable. The stink bug might not be scary, but just annoying really. However, the stinger and "bugs under your butt" effects are no-gos for me. If I am somehow forced into watching this show, I sit on the very very very edge of the bench, looking like a complete moron until everyone figures out why I'm doing so.

There are a lot of things I hate about the Nemo subs in Disneyland including the incredibly small seats, the overlong ride, and then a few scary moments thrown into what is incredibly boring otherwise. The two don't balance each other out and I find the "blue light" fish to be terrifying and in your face. No thanks!

Finally, this one is so ridiculous that I doubt I can even explain it properly. When you're in the dinosaur section of the Ellen's Energy Adventure, there is a creature off to the side as you make the first turn and head towards where the Ellen animatronic was. There's nothing frightening about the dino himself, but he does spray air every so often and it makes me jump every time... I am not proud of this.

I think now you'll understand why I prefer Not So Scary to Halloween Horror Nights. Unfortunately, as soon I finished this list, I thought of even more show elements that scare me or have in the past. So judge as you will, laugh at me, and enjoy your Halloween horror, but I'll be over here munching on Werther's and singing "It's Halloween-lo-ween" instead. 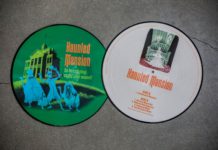 Vinyl Review: it’s a small world, Pirates of the Caribbean, and The Haunted Mansion 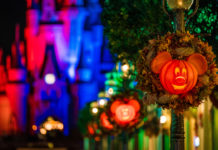 Live Blog: The First Mickey’s Not So Scary Halloween Party of 2017 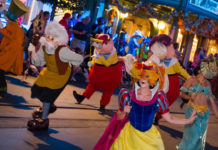