October is here, pumpkins, which brought waaaaaay more Tsum Tsum news than I can handle. ZOMG! And it’s more news than I can share in one post, which is why this week the blog and vlog are completely different. This blog is going to stay focused on the game, what new, what do, and why. The vlog is all about the Tsum Tsums I found last weekend at Walt Disney World and the newly released Marvel Tsum Tsums. Ready???... GO!!!!!

I woke up on October 1st to discover that it was once again Lucky Time. I was super stressed by the news as I would be taking a red eye to Orlando (and sho ‘nuff, my eyes were red by the end of it). I knew I would have precious little time to play to get the two new Tsum Tsums, Pumpkin Mickey and Pumpkin Minnie. I love pumpkins, don’t you pumpkin? (Gets in car, drives to Starbucks, returns with two Venti Pumpkin Spice Frappuccino Lights) SLUUUUURRRRRRP! I ended up being super lucky as I got both Pumpkins multiple times by the end of the weekend. They will only be available this month, meaning after October 31st you can’t has them anymore!!! But it’s okay because both are kind of lame. Pumpkin Mickey’s skill forces you back into Fever, which will probably come in handy on future Bingo missions but does little to get a top score or a good chunk of coins. Pumpkin Minnie is much better, with a skill that rains down a shower of candies that you can pop to clear surrounding Tsum Tsums. Also she is pink and wears a witch hat. YAAAASSSS QWEEN!!!

Trick-or-treat, shout “hooray,” give me something new to play! Did you notice that the button that used to say “Bingo” now says “Cards”? The whole reason for the name change seems to be this new Trick-Or-Treat game. There will be a new card each week in October and completing all of them gets you the exclusive Sandy Claws character in the game! And to play the game, they’ve introduced more pumpkins. BRB! (Gets in car, drives back to Starbucks, orders two more Venti Pumpkin Spice Frappuccino Lights, adds on a pumpkin scone). SLUUUUURRRRRRP! NOM NOM NOM NOM NOM!!!!

There’s a pumpkin on the card, a big fat one with a window so you can see how much candy you’ve filled it with. Then there’s the pumpkin hearts, which appear randomly in your heart meter. I find that they are fairly frequent for about the first 10 plays, then less likely to appear after that. You’ll need a lot of friends sending you lots of hearts to get these faster and I recently learned that clicking “Claim All” does not return the favor, so remember to claim each one individually to gift hearts back to your friends (PS: My Line ID is goofystitch if you want to, like, be friends).

The final pumpkin is the kind that appears in the game, if and only if you’re using a pumpkin heart to play. During the game, a big pumpkin falls in with your Tsum Tsums and you have to bust it open before time runs out. To do this, you have to use a Tsum Tsum skill or pop adjacent bubbles three times on the pumpkin. Not every Tsum Tsum’s skill helps. My first assumption was that Elsa’s freeze power would help defeat it and I was wrong. My Tsum Tsum of choice for these missions is Sorcerer Mickey because you can tap the pumpkin three times during his skill to pop it quickly. Another pro-tip: You can waste non-pumpkin hearts by starting a game, pressing pause and then clicking “Retry.” This helps if you’re in a hurry to clear the missions and don’t want to play an average pumpkin-free game. Personally, I would like all my games to have pumpkin, punkin’.

Not every pumpkin contains candy (sob!) and to complete the first card, you need to collect 20 pieces. It took me about two hours of non-stop play to fill the pumpkin and in the process I collected quite a few coins and skill tickets. The prize for completing the first card is a Premium Box Ticket. Good luck!

Another treat from Disney Tsum Tsum this October is the subscription service, which goes live on Friday, October 9th!!! I've been obsessing over this since the D23 Expo. It's $24.95 each month and automagically keeps renewing itself every month. The first two Tsum Tsums are a small size Mickey, making his debut here, and an exclusive winking Oswald... ... ... TAKE MY MONEY NOW!!! If you want to see me gush about the Marvel Tsum Tsums and see my Tsum Tsum finds at Walt Disney World watch this! 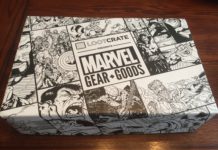