Walt Disney's Nine Old Men are a group of key animators at The Walt Disney Studios who helped create some of the most memorable characters and stories in animation history. These pioneers have left their mark on our culture and a lot of artists still look to their work for guidance and inspiration today. Chances are, you have seen their work in short films, full-length animated features, and a few attractions at a Disney Destination. A couple of the Nine Old Men have even lent their voices to the more recently released animated feature film: Disney*Pixar's The Incredibles.

Each of them have individually been honored with a Winsor McCay Award, which is an animator's lifetime achievement award and, in 1989, all Nine Old Men were honored as Disney Legends.

These legends have been teachers, mentors, and dear friends for many Disney animators who have contributed to recent films. One animator in particular was recently asked to share his stories and experiences with these legends. He lead the development of the recently released book, The Nine Old Men: Lessons, Techniques, and Inspiration from Disney’s Great Animators that reflects back to their art, their craft, and their personalities. Polish-born and Germany raised Andreas Deja remembers being amazed by the magic of Disney animation after seeing The Walt Disney Studios' 1967 release of The Jungle Book. He was so amazed that he actually applied for a job as a Disney animator at the young age of 10. Disney declined his application but provided motivation and encouragement to continue his studies as they are always looking for new talent. Deja studied Arts in Germany and was hired 10 years later as an animator at The Walt Disney Studios and studied under one of the Nine Old Men, Eric Larson.

Deja has since left his mark on the legacy of Walt Disney Animation and on the animation industry, as a whole. He has lead the animation effort of some of the most memorable Disney characters, like Gaston, Jafar, Hercules, Scar, Lilo, and Mama Odie. Deja was honored with a Winsor McCay Award in 2007 and in 2015, Andreas Deja became a Disney Legend. To kick off a series of talks dedicated to exploring the lives and achievements of these Nine Men, The Walt Disney Family Museum hosted a discussion with Andreas Deja where he shared the art, techniques, and memorable personal stories of his time with the Nine Old Men. Deja’s recently released book was available for purchase and signing after the presentation.

The discussion followed a similar format to that of his animation blog, Deja View, where he regularly features sketches of the most influential animators in the industry. He commented on how it was technique combined with each of their unique personalities that made the quality of Disney Animation unlike any other studios’. To quote animator Marc Davis, “…it is the ultimate art form, involving drawing, acting, music, dancing, and painting, all combined into one medium.”

Learn more about each of the Nine Old Men:

Even though this amazing and comprehensive presentation ran longer than planned, both Andreas Deja and The Walt Disney Family Museum were gracious enough to allow the attendees to meet with Deja at the end, who was also signing copies of his newly released book. This presentation was a feast for the eyes and a Disney animation historian fan’s Never Land. The amazing art of Walt Disney’s Nine Old Men can be seen in Andreas Deja’s new book, The Nine Old Men: Lessons, Techniques, and Inspiration from Disney’s Great Animators. You will also find regular updates on Andreas Deja’s animation blog, Deja View. 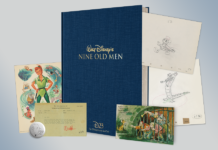 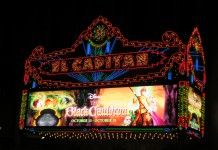 The Black Cauldron at the El Capitan Theatre