October 1st is always a big day for Disney fans as two Walt Disney World parks (and the resort itself) were born on that day. This year, Bill looked back at his experience at Walt Disney World's silver anniversary which was celebrated from 1996 to 1997. Disney ran into some more fan controversy in October when the significantly raised prices on their Annual Passports and restructured the program altogether. Alex and a Devil's Advocate debated the changes in another Your Argument is Invalid feature. Interview with Jonathan Freeman — Jafar in Aladdin by FanBoy

This fall, Aladdin exited the vault and was released on Blu-Ray and digital. To mark the occasion, we spoke to Jonathan Freeman who played Jafar both in the film and on Broadway about his experience being a bad guy for all these years.

Nearly two months before the film invaded theatres, the final trailer for Star Wars: The Force Awakens premiered on ESPN's Monday Night Football. After immediately buying their tickets to opening night, the LP team wrote up their thoughts on what they had just seen. Did you know that you can download and borrow great Disney content from your local library right on your smartphone or tablet? Lauren reviews the app Hoopla that allows you to do just that.

Video Pick: 30 for 30 Parody – Angels in the Outfield by Doobie Moseley

If you're a fan of ESPN, surely you're familiar with their 30 for 30 film series. CollegeHumor decided to create their own 30 for 30 style documentary about Angels in the Outfield (as if the events in the film were real). Like we said, Hocus Pocus was everywhere you looked this Halloween. But did you know these 11 facts about the film? Andreas Deja, named a Disney Legend himself this year, wrote a book discussing the famed Nine Old Men of early Disney animation. Brian offered his review of the book and what to expect from it. The Black Cauldron has a reputation for being one of the worst Disney animated films to ever be produced. Despite that wide-held belief, Joe argues that you should give the film — which turned 30 years old in 2015 — another chance and viewing. You may recall the DisneyMania series that featured mostly Disney Channel stars covering Disney tunes. The concept was revived this year with We Love Disney, although this time around they lined up some legit pop stars. Marshal broke down the album track by track to give his review. A Far from Nightmarish Evening with Danny Elfman by Jeff DePaoli

On Halloween evening, Nightmare Before Christmas composer and singing voice of Jack Skellington, Danny Elfman, put on a concert comprised of that film's songs at the Hollywood Bowl. Jeff attended the show and reported back with photos and tales from the event. Inside Out Week: Interview with Richard Kind by Doobie Moseley

To celebrate the Blu-Ray release of Pixar's Inside Out, LaughingPlace hosted Inside Out Week featuring interviews with the cast and crew behind the film. First, Doobie got to talk to Bing Bong himself, Richard Kind. Inside Out Week: Interview with Phyllis Smith by FanBoy

Later in Inside Out Week, FanBoy got to interview the scene-stealing Sadness, voiced by The Office's Phyllis Smith. Smith spoke on how she got the role and how she was "happy to be sad." Another Disney film to hit a major anniversary was Fantasia which turned 75. Justin got to attend of the screenings that Disney held in honor of the anniversary and reported back with his overall impressions. Of all the controversial decisions Disney made this year, the announcement that this would be the final year for the Osborne Lights cut fans the deepest. Jeremiah commemorated the final season by taking lots and lots of photos for us to remember the gorgeous display by. Fantasia 2006: What Could Have Been by Alex Reif

As we continued to look back at the legacy of Fantasia, Alex wrote about the scrapped Fantasia 2006 project. How Well Do You Know Your Disney Dinosaurs?

Inspired by the release of The Good Dinosaur, we look at some Disney dinos of the past and test your knowledge of them.

Season of Force at the Disneyland Resort by Doug Marsh

Before Star Wars Land opens sometime in the next few years, Disneyland kicked off the first of what will likely be many Season of the Force events in November. In addition to the opening of Star Wars Launch Bay and an updated Jedi Academy show, Space Mountain has been given an overlay to become Hyperspace Mountain. Doctor Who Fans Celebrate Galliday at Disneyland by Sara Lopes

Unofficial holidays in the Disney Parks such as Dapper Day have grown significantly over the past few years. This year, Sara attended another up and coming unofficial gathering — Galliday — which is celebrated by fans of BBC's Doctor Who. From Steamboat Willie to Mickey Moo — 87 Mickeys by Doobie Moseley

In 2015, Mickey Mouse turned 87. Doobie decided to collect 87 different pictures of the Mouse in honor of his birthday. Fantasia and Stokowski: How It All Came Together Over Dinner by Erin Stough

When Walt was working on Fantasia, he knew he wanted a well known and respected conductor to bring some prestige to the project. Luckily for him, he found just the man for the job in a chance encounter. Just prior to the release of Mockingjay Part 2, Doobie found some unexpected connections between the film/book series and The Walt Disney Company. Even more surprising, the movie wasn't as big of a box office smash as anyone would have believed. 2015 Disney Turkey of the Year

Disney can't bat 1,000 all the time and they proved that once again this year. With five nominees and one winner, we looked at some of Disney's biggest missteps to crown our Turkey of the Year.

The Nine Old Men: A Look at the Legendary Disney Animators by Robert Canchola

Earlier we told you about the Nine Old Men book Andreas Deja penned about the Disney animators. Later in the year, Robert attended a presentation by Deja about his time with the Men and give us a closer look at all nine of them individually. This year, Bill created a countdown to Christmas featuring 12 Disney films (one each night) for your family to enjoy.

As we here at LaughingPlace anxiously awaited the release of The Force Awakens, this video was pretty much on the nose. Disney continued its partnership with Hour of Code this year and enabled kids to build their own Star Wars video game starring BB-8. Justin attended their kick-off event and shared more about what the organization is all about.

Star Wars Cast Spills All… or Not by Kyle Burbank

With only two weeks until release, Disney was still keeping a tight lid on the latest Star Wars film. This led to a very interesting and different kind of press junket. However, we did get to see Daisy Ridley to sing a song from Mulan, so there's that. 2015 marked 49 years since the world lost Walt Disney. In honor of the significant date, Bill wrote this about a magazine article written in 1963 about Walt that's always stuck with him and included pictures from the original article. Kathleen Kennedy: Our Disney Person of the Year

Finally this year, we at LaughingPlace named our first annual Person of the Year. When the editors convened to discuss who should be awarded the honor, the answer was unanimous and near instantaneous: Kathleen Kennedy. Not only did she help make The Force Awakens the triumph that it is but has also been responsible for some of the most iconic films of all times. If you aren't familiar, be sure to check out our piece on why she deserves to be our 2015 Disney Person of the Year.

Thanks again to all of our contributors and all of our readers for making 2015 a fantastic year for LaughingPlace. Have a Happy New Year — we look forward to bringing you more Disney news, opinions, and fun in 2016! 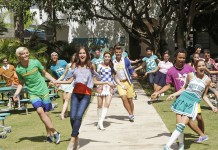 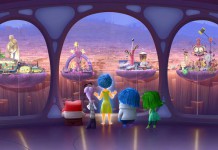 Inside Out Easter Eggs