After nine years on the air, Disney Jr. cancelled Mickey Mouse Clubhouse to work on a new series, Mickey and the Roadster Racers, which is set to debut in 2017. But with 120 episodes under its belt, there is no shortage of MMC content to tide kids over until the new series debuts. With that, Disney is releasing the 21st compilation DVD, Mickey Mouse Clubhouse: Pop Star Minnie.

Dubbed “A Minnie Special,” the titular episode is 30-minutes long without commercials. Minnie Mouse is giving a concert at sunset, but all of the musical instruments have gone missing. Kids are encouraged to participate and interact with Toodles to help Mickey and his friends find them and get to the show on time. Despite “pop” being in the title, the only musical genres featured in this episode are blues, polka and rock.

Three standard-length episodes follow the main feature. In “Mickey’s Clubhouse Rocks,” Mickey and his friends are holding a Battle of the Bands contest, in which Rockin’ Mickey and Pop Star Minnie form a band. When Minnie and Daisy decide to host a flower show, they discover that there aren’t any flowers in the park in “Minnie and Daisy’s Flower Shower.” Lastly, “Minnie’s Mouseke-Calendar” finds Minnie trying to find all of her calendar’s pages after a wind storm scattered them all over town.

There’s also a physical bonus with this release, an inflatable toy guitar. It’s pink and looks just like Minnie’s bow-shaped guitar from “Pop Star Minnie.” Parents will need to inflate it for their child, which can be a little frustrating as it doesn’t have a valve and instead comes with a straw. There is a designated area to insert it, but you have to puncture the plastic to get it in. Thankfully, it seals back up after the straw is removed. When inflated, the guitar is about a foot and a half in length.

Pop Star Minnie comes in a standard-sized black DVD case, housed inside of a holo-embossed slipcover. Inserts include the aforementioned inflatable guitar, which is folded and packaged with instructions for inflation, as well as an ad for Disney Movie Club and a code for 75 points through Disney Movie Rewards.

This disc uses Disney’s Fast Play feature, which allows parents to pop the disc in and walk away without waiting for a menu. Letting this run its course, the disc plays ads for Zootopia and The Good Dinosaur. After the main feature, bonus episode and shorts, it plays an additional ad for Disney Movie Rewards before taking you to the main menu. The menu is a static image of Minnie with her guitar.

Mickey Mouse Clubhouse: Pop Star Minnie is clearly targeted at preschool girls, with lots of pink on the cover plus the included pink guitar toy. But like every episode of the series, the on-disc content is gender neutral and would appeal to any kid who loves this show. With slightly over 2-hours of content, it's a great way to entertain your kids while they enjoy adventures with Mickey, Minnie and all their friends. 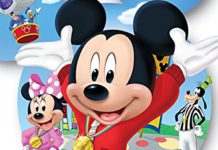 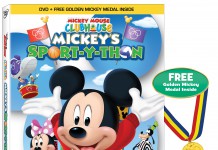 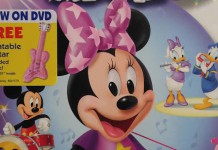 “Pop Star Minnie” Lets Your Little One Become a Star Too