Not many animals embody unabashed fun, childlike intelligence and curiosity quite like monkeys. It’s easy to clearly picture monkeys swinging through the rainforest trees chattering and howling in their own special language. And no one caricatures and captures the essence of animals like Disney animation and live-action productions. As the Chinese New Year — 2016 being the Year of the Monkey — approaches, let’s take a closer look at some famous Disney simians. Where would our hero Aladdin be without Abu? Most likely Aladdin would still be stuck in the dungeons of Agrabah! Abu’s quick-wittedness and humor are what make him one of Disney’s best monkeys. But ,besides being Aladdin’s side kick and number one pal, Abu has some very interesting tidbits of trivia. Did you know…..? Another famous and colorful monkey can be found in The Lion King. Rafiki acts in a shamanistic role within the lion pride, offering sage advice to Mufasa and, eventually, Simba. At times, Rafiki can be utterly silly, using humor to emphasis his point while other times he has a quality of other worldliness. There is definitely more than meets the eye where Rafiki is concerned! Did you know…? It may seem like I’ve over looked a few of the more legendary animated characters such as King Louie (from The Jungle Book) and Terk (from Tarzan) but neither are truly monkeys! (Honestly, I never gave the species distinction much thought until researching this post!) King Louie, and orangutan, and Terk, a gorilla, belong to the ape family and are not considered true monkeys. Scientists have recognized a few glaring differences that make it easy to distinguish between the two species. A few of the differences are: If you are still looking for some more monkey madness, make sure to check out some of Disney’s other films such as Monkey Kingdom and Chimpanzee. Both take a “true life adventure” look at different simian species and document their quest for survival. 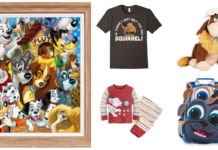 Celebrate the Year of the Dog with These Disney Dogs Items 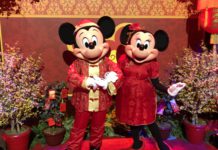