Lego Star Wars returns with another mini-series following the success of The Yoda Chronicles. Droid Tales takes place after the events of Return of the Jedi, allowing C-3PO and R2-D2 to tell the story of all that came before. Their flashbacks start with Episode I and move their way forward.

In typical Lego fashion, this series takes a comedic approach with the material. Luke’s confusion over young Anakin’s force ghost at the beginning of the first episode prompts C-3PO to tell the prequel trilogy story. The anti-Jar Jar fans will love this series’ approach to the character, which rival’s South Park’s methods of offing Kenny every episode.

Connecting C-3PO’s stories is a new rescue mission. When a mysterious captor abducts R2-D2, C-3PO finds himself on another adventure across the galaxy, regaling anyone who will listen with stories of the rebellion.

In addition to recapping both the prequel and original trilogy, the droid tales also recaps some of the adventures from fellow Disney XD series Star Wars Rebels. All five episodes are presented on this DVD release for a total of nearly 2-hours of content.

Disney’s video presentation pleases on DVD, the only physical way to purchase this series. The standard definition content is fine, as computer generated Lego figures couldn’t yield much more detail than they do here. The only flaw happens during high-speed chases where edge detail feels too soft. However, such scenes are so infrequent that it’s of little concern. Those who feel the need to own the series in HD can do so from iTunes for the low price of $9.99.

The primary audio track on DVD is English 5.1. Rear speakers get plenty of use thanks to score and sound effects filling the full sound field. And the subwoofer gets to blow of steam several times per episode courtesy of ships launching to warp speed and comedic battles. Other language options include Spanish 5.1 and French 2.0.

There aren’t any on-disc bonus features to be found in this release, but there is a physical bonus. Nine Topps trading cards were created exclusively for this release, which have been split into three sets. Each DVD contains one of the three sets, which are packaged in a clear wrapping. My review copy came with Darth Vader, Stormtroopers and Rebels.

Lego Star Wars: Droid Tales is housed in a standard-sized DVD case. Inserts include a code for 75 points through Disney Movie Rewards, a flier for Disney Movie Club and the aforementioned set of exclusive Topps trading cards. A holofoil embossed slipcover is included in the first pressing.

The DVD doesn’t have any ads that automatically play, but there is a video that you must sit through before the menu loads. It features C-3PO’s hands holding a tablet watching clips from the show. Selecting “Sneak Peeks” from the main menu plays ads for Star Wars Rebels, Zootopia and Disney Movie Rewards.

Lego Star Wars: Droid Tales is another fun series that has just as much entertainment value for adult fans as it does for kids. It’s a great way to introduce kids to these characters, but also goes out of its way to cater to fanboy criticisms of some of the previous episodes in the saga. Those looking for better picture quality are advised to purchase the digital HD version instead, but with a great DVD presentation and the exclusive Topps trading cards, Disney has made this release appealing to collectors. 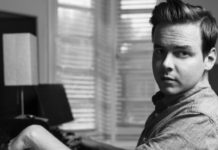 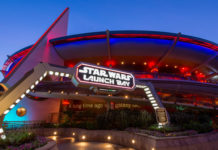 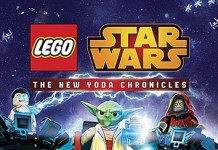