On Saturday, the Lights, Motors, Action! Extreme Stunt Show performed it's very last show in Disney's Hollywood Studios. The show has been a major part of the park since it opened in May of 2005 and is a recreation of the Moteurs, Action! show at Walt Disney Studios Park at Disneyland Resort Paris. That show was open since 2002 and, after being widely successful in the French market, was brought stateside to Disney World's own movie-themed park. Replacing the Residential Street section of the Backlot Tour, this 5,000 seat theater would host multiple showings a day of this 40-minute epic extreme stunt show. The show would follow a supposed film crew who explain they are shooting a high-speed action movie, and everyone in the audience is in attendance to watch the process. Though the "behind the scenes" filming theme always seemed a bit weak, that lag in the show would be made up in the show's extravagant action moments, with high-speed car chases and explosions, which were always impressive and entertaining.

As the years went on, the show would be used to promote several Disney movies like Herbie: Fully Loaded and Cars 2 with the titular characters making appearances in the show, which were silly and goofy, but mostly just for filler as the crew set up the next epic stunt. The show often gets a bit of criticism for not quite screaming "Disney, which is a complaint I don't quite understand. Though it's not perfect, I always felt the show did a decent job at being entertaining and offering the type of behind the scenes fun that fit well into the theme of the park. It may not be completely "Disney" to many, but it was enough to satisfy guests. Aside from the Backlot Tour's demise in 2014, this closure is probably the one that hit me the hardest so far. Though there isn't a series of major E-ticket attractions found in the Streets, the street added a fun, enjoyable atmosphere to stroll in and to explore (particularly during the Christmas season). In fact, many of our favorite memories of our family trips to Hollywood Studios were within that very stretch of the park. It would become an annual tradition to take a photo in front of the New York structures. I have many memories of climbing around the Honey, I Shrunk the Kids Set, which was always a favorite spot for me as a child. We also have countless pictures in various areas of the Streets, which were a quiet and fun to explore during our trips while on our way to regular required viewings of Lights, Motors, Action!, located at the end of the street.

I've often discussed why the future of Disney's Hollywood Studios has me rather disappointed and this closure only strengthens that concern. Seeing as the Studios has always been one of my personal favorites, it's a bit frustrating to see it morph into an entirely different park, leaving behind the theme it was built on and strived for. It'll be odd to visit the park again and not be able to roam the Streets of America, but, with every loss in the park, I am excited to see what new fresh additions they bring to the experience and I hope it pleases well enough.

It feels rather strange and unsettling to me to say goodbye to yet another one of my favorite aspects of my once all-time favorite park. Lights, Motors, Action! was never Disney's best (not by a long shot), but it was an incredibly entertaining interactive experience that got better with every viewing and the memories that the fun of the Streets of America gave every year is something I'll cherish for a long time. It's always been a blast to hang around in those streets, so it'll feel weird to go back to that park and not have that a part of my trip, especially since it was always an integral part of our visit. So, as we say in Hollywood: That's a wrap! 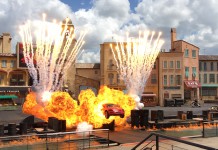 In Memoriam: Streets of America, LMA, and Honey, I Shrunk The Kids Set