Today we got our first Ghost Post parcel. Inside were several items that, when combined with the Phantom Radio app, give us part of a mystery to what is happening inside the Haunted Mansion. In case you aren't one of the 999 happy participants, here's all the fun that this first shipment contained:

First, we have an introductory letter which, when wet, gives us hints on how to unlock the secrets of the items in the box. Each item can be scanned to unlock messages from the ghosts of the Haunted Mansion in the app. Alternatively, you can enter a three symbol code located on the device to get the same message. Let's take a look at each item. When you scan our first issue of "The Grim Gazette" you hear the following:

PHINEAS: Ezra, Gus! Look at that, fellas. Look how murky it is. Like the whole Mansion's been wrapped up in fog.

GUS: I'm reckon I'm goin' stir crazy. I can't take much more. I feel like a prisoner, shackled at the ankle!

GUS: I won't last much longer. We can go guys, right? I mean, how bad could it be, getting lost in the fog forever? Forever isn't that long. Let's go!

PHINEAS: Don't do it!

EZRA: It's too dangerous.

GUS: What's the worst that can happen? We're ghosts!

EZRA: Exactly! We're ghosts. The rules of the living don't really pertain to us, do they? We don't know why the fog is here or what happens in it, and I for one DON'T CARE to find out - no matter how much I miss following the mortals home.

GUS [Wailing]: Is this fog ever gonna lift?!

PHINEAS: Now just hold your hearses there, Gus. I've heard that some of the other residual residents have started, what they're callin', a "Committee of Wandering Ghosts," and they're fixin' to do something about our, you know, travel troubles.

EZRA: You actually go to those committee meetings?

PHINEAS: Naw, course not, Ezra! You think I died yesterday? I'm not about to get on You-Know-Who's bad side, am I?

GUS: How come you know so much about it, then?

PHINEAS: Let's just say that a little birdie told me.

EZRA: And they got a plan?

PHINEAS: They believe they do. But who knows if it'll really work?

GUS: It was the raven, right?

EZRA: It better. Because if we can't hitchhike anymore, then what? [quietly] I'm scared.

PHINEAS: We're all scared. We have to keep our spirits up. Don't let the fog go to our heads. And let's hope this Committee does--

THE STATIC CUTS OFF THE CONVERSATION VICTOR: Do you think the mortals will know what they are supposed to be doing with the things we have sent them?

SALLY: I have every confidence that the Ghost Relations Department put those boxes in the proper hands.

VICTOR: But have they enough talent to find the hidden warning?

SALLY: We can only hope.

VICTOR: We spent all of that time with the training of those moths to chew the advert in just the correct places.

SALLY: You did an exemplary job.

VICTOR: Danke schön, thank you you are too kind. But if they do not find it, then it will not matter how well I did the job!

SALLY: Too true, too true.

VICTOR: If the mortals are as perceptive as we hope, they will align the moons with the stars and see that all is not as is seems.

If you take the ad and turn it upside down you will see a moon and two stars on top. When aligned with the same symbol in the Aunt Agony column in The Grim Gazette, you see a secret message through the "moth holes." The message "keep this for waltzes next month" implies that this piece will be reused in the future. Next, we have a wedding announcement for the nuptials of Constance Hatchaway Harper Banks and The Most Honorable Marquis de Doome from 1874. When this item is scanned, we hear:

PHINEAS: You know, there's one ghost in the Mansion that I reckon is just fine with being fogged in.

GUS: Oh. Oh. Bet you're talking about Ol' Constance. You know, the Bride.

PHINEAS: Be careful with that thing. Where did you even find that axe?

GUS: It was wrapped up over there, in a big white bow.

EZRA: Why do you think that bout Constance?

PHINEAS: Think about it. How many husbands did she get rid of?

EZRA: I think it was five. Seriously, put that down before you hurt someone!

GUS: Yeah, and even after she did them in, they're all still in love with her!

PHINEAS: Yup, so I'll wager she's thrilled that they're all trapped somewhere else and can't get back.

EZRA: Leave her in peace for a bit.

PHINEAS: You gotta admire her handiwork. I mean, by the time she got to her third husband, she had it down to a science.

GUS: Yeah, she really had a good head on her shoulders. Unlike her grooms.

EZRA: You can see that right on the wedding invitation.

GUS: But only if you've got the chill of ghostly fingers, am I right?

THEY ALL MUTTER IN AGREEMENT

PHINEAS: You know, in spite of the body count, she's a sentimental one.

PHINEAS: I know. She used to keep the invitation in the icebox, right next to the leftover wedding cake.

GUS: Yeah... We're talking about the cake, right? Owe! Who leaves an axe in an attic? Really?

Put that wedding invitation in the freezer for a bit, and you get a whole new message. We discover that Mr. de Doome died the day after his wedding day. How odd.... If you scan this version of the certificate, you get an entirely new message:

VICTOR: I have good news for the committee good news, Miss Slater.

VICTOR: But, I am also having the bad news.

SALLY: The good news, if you please. We need all the cheer you can supply.

VICTOR: The mortals appear to have uncovered the true use of the objects you sent. They MUST be the spectrally aware visitors we were noticing, yeah?

SALLY: Brilliant! But... how do you know?

VICTOR: I'm glad you asked for the good news first or else it would have been quite confusing. Well, you see that is the BAD news.

VICTOR: Ach! Their powers of connection to the spirit world are most formidable, enough to permit them to reach through the veil and hear the comings and the goings in our Mansion. Even over great distance - they can hear us! Alas, the first one to notice that mortals were listening in---

VICTOR: Das Oopsie. As you might guess, Madame Leota is not in the best of spirits at the moment.

SALLY [Heaves a sigh]: Nothing to do but to face her wrath.

VICTOR: I will come with you.

VICTOR: We must stick together in this time of strugglement. The Phantom Radio takes a little work. This cardboard creation comes with instructions which creates a housing for your phone using the "Phantom Radio" app. Scan the radio to hear more about the Committee:

VICTOR: Ach! Sally Slater, there is no need for all the shouting.

SALLY: VICTOR, it's done! They've done it! Oh, yes, this is quite wonderful.

VICTOR: What was done? By whom?

SALLY: Why, The Ghost Relations Department, of course. They've sent the boxes!

VICTOR: The boxes? The boxes? THE BOXES! Why yes, of course, the boxes! But wait, the boxes... the contents. They actually sent the haunted items to mortals?

VICTOR: This plan is full of the perilousness. Just think of it! All that spectral power -- in the hands of --

BOTH (IN UNISON): -- FOOLISH MORTALS!

SALLY [contrite]: It's true. But honestly, what choice did the Committee have? Things are desperate. More desperate than most of the ghosts know.

VICTOR: Is it as bad as the gossip says then, Miss Slater?

VICTOR: Well, there is nothing to be done now except hope for the best. Please to be keeping your bones crossed.

VICTOR: Bad luck? Why is the bad luck? Superstitions are for the living, my dear.

THEY ARE CUT OFF BY STATIC The bat looks like a regular trinket at first, but you will quickly discover that it fits inside the Phantom Radio. When put in place, turning the bat will tune the radio to switch between the various stations. But you can also scan the bat to hear this:

SALLY: You, floating up there! Do you have a moment?

PHINEAS: Hang on, be right down!

THE SOUND OF A GHOST FLOATING DOWN

PHINEAS: Hello there. Say, aren't you the gal from the tightrope?

SALLY: I'm sorry? Oh yes, of course, the painting. My name is Sarah Slater, but please call me "Sally." Pleasure to meet you.

PHINEAS: Pleasure is all mine. What can I do for you?

SALLY: As Chief Spookswoman and Membership Committee Chairghost of the recently formed Committee of Wandering Spirits I would love to speak to you for just a mo--(ment)

PHINEAS [CUTS HER OFF]: Aaaah Miss Sally, that's not really my cup of tea. Committees are for the living. I should be getting on--

SALLY: WAIT! Yes, ordinarily I would agree. Committees are a dreadful bore, and the sort of thing that we spirits hoped that we had left behind in our mortal, corruptible state. But the Mansion, sir, is in trouble. Hasn't the fog prevented you from performing your customary rounds?

PHINEAS: You could say that...

SALLY: And are there not never-ending hordes of our honored guests who are leaving to return to their homes, robbed of the chance to be accompanied by you or one of your fellow hitchhikers?

PHINEAS: Yeah, but there's nobody who can say what's to be done about it!

SALLY: Sir, you have penetrated directly to the heart of the matter. What's to be done? My friend, there is but one thing to be done! And that's to join our Committee of Wandering Spirits. Even as we speak, the Committee has put into motion certain plans that we believe-

MADAME LEOTA: Enough! Just what do you think you are doing?

SOUND OF PHINEAS FLOATING AWAY, HASTILY

SALLY: Madame, there's no need to take that tone. I was merely trying to impress upon our perambulatory friend the importance of--

MADAME LEOTA: I know very well what you are up to with that committee of yours, Ms. Slater. You and your litter of misinformed ghouls can waste as much time as you like trying to recruit foolish mortals. To solve a problem like the one at hand, you'd need a whole host of mediums as powerful as I was in life. It's highly unlikely you've found even one.

SALLY: Well not yet, but I have a very good feeling about this!

MADAME LEOTA: So as you waste your energy on your feelings and schemes, I will consult my cards to find a real solution to the problem, a task that would be much simpler but for your proselytizing and prattling. I will let you know when you and your friends are needed, and will thank you to desist until then!

SALLY: Of course, Madame Leota. But really, you should --

MADAME LEOTA: SHOULD I? REALLY, SHOULD I? Or should YOU return to your tightrope?

SALLY: Dearie me. I beg your pardon, Madame, I fear I've taken a wrong step.

MADAME LEOTA: As the alligators know, it isn't your first wrong step.

SALLY: Right, I'll just be off then.

MADAME LEOTA: Her, in charge of a committee. Really, if there was anybody in the Mansion that should head anything, it'd be me!

Check out the rest of our guide on the next page: 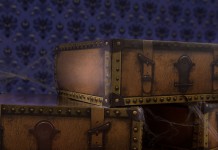