After the classic fairytale Goldilocks and the Three Bears, she and the youngest bear became best friends. Now they have fun adventures in a place where all fairytale characters live in Disney Junior’s new animated series, Goldie and Bear. Arriving on DVD for the first time, Goldie & Bear: Best Fairytale Friends is here to entertain little ones anytime they want to visit the fairytale kingdom.

The characters are fun and the world is inviting, but one of the best things about the series is the music. With a fun theme song and a musical number in almost every episode, kids will love singing and dancing along. There are also some familiar voices, such as Jim Cummings as the Big Bad Wolf (voice of Tigger and Winnie the Pooh) and Kath Soucie as one of the pigs (Kanga). But my favorite thing about the series is that it introduces kids to some fairytale characters that Disney hasn’t covered yet in their films or shorts.

There aren’t any on-disc bonus features, but there is one physical bonus. Described as a “Playtime Fun Set,” which is really a sturdy tri-fold card with some activities. A sheet of static cling stickers allows kids to decorate a landscape on the interior of the card with some of the shows fairytale characters. On the back of the card is a maze and a coloring page to give kids even more creative fun based on Goldie & Bear.

Goldie & Bear: Best Fairytale Friends is housed in a standard sized DVD case with a holofoil slipcover that matches the design of other recent Disney Jr. releases. Inserts include the aforementioned “Playtime Fun Set,” an ad for Disney Movie Club, and a code for Disney Movie Rewards which earns you 75 points.

This disc uses Disney’s FastPlay, which means you can pop the disc in and it will automatically start without going to the menu. If you let it run its course, it plays an ad for Finding Dory before the episodes. This ad can also be skipped by selecting the main menu option. After the feature, it plays ads for Disney Movie Rewards, Disney Parks and Disney Store.

Goldie & Bear is a fun show aimed at preschoolers that introduces kids to some of the most classic Mother Goose characters. The world and characters are fun and inviting, making this a wise purchase for any kid who can’t get enough Disney Junior. The show is still pretty new and has yet to hit Netflix, so if you want the convenience of having a collection of episodes at your disposal whenever your little one needs to visit their fairytale friends, I recommend Goldie & Bear: Best Fairytale Friends. 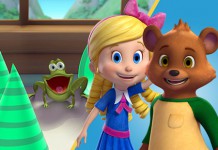 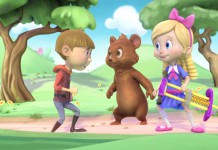 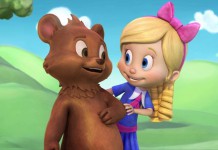