The Jungle Book just finished it's second weekend at number one, far exceeding even Disney's own expectations for the adventure remake and crushing competition from Universal's follow-up to Snow White and the Huntsman. It should come as no surprise to Disney fans that the company has no intentions of slowing down and they recently announced a flurry of new release dates, without saying which films will take which dates. However, we do know which fairytale films are in the pipeline. Here's what fans can look forward to over the next few years. Like The Jungle Book before it, 101 Dalmatians was adapted as a live action film about 20 years ago. This time around, Emma Stone will be playing Disney's most villainous diva in fur. Glenn Close is a tough act to follow and a role like this is breaking the mold of what we're used to seeing Stone do. With a screenplay by Kelly Marcel (Saving Mr. Banks), hopefully this film doesn't water down the villain the way Maleficent did. Disney fans prefer their villains villainous. Cruella may have the ability to not make the same mistakes as the first Maleficent, but this sequel is sure to repeat them. Now that Angelina Jolie has been proven to not have even an ounce of evil in her, this sequel will surely pit her against some new villain. I'm sure the Moors are in trouble and she and Aurora have to work together to protect them. I'm bored with it before it even begins. Disney should look at The Huntsman: Winter's War as an example of how a successful franchise lost it's fanbase between films. Does anybody want more Maleficent? This may be a tough lesson for Disney to learn. A Wrinkle in Time

While Madeline L'Engle's classic novel has never been a Disney animated film, it was previously a Disney TV movie. This science-fiction fantasy is based on an incredible book and stands to set itself apart from the rest in the same way Guardians of the Galaxy stands out in the Marvel Cinematic Universe. Plus, it has a tesseract. The bending of time and space is an exciting concept and I hope this becomes a full fledged franchise of its own (there were five books in the series). I swear, this project has been bouncing back and forth for 15 years. I remember back then, it had Dwayne Johnson attached when he was new to Hollywood and teenage Lindsay Lohan before the world gave up on her. At another point, it was to reunite Tom Hanks and Tim Allen. Now it's back on with Dwayne Johnson still attached, but post Fully Loaded Lohan not so much. The Disneyland attraction was already based on a movie (The African Queen), so this doesn't seem like a huge stretch. My guess is that Johnson will play a quipping skipper on a three month expedition where he will point out some of his favorite plants, take them to an elephant bathing pool and introduce them to Shrunken Ned. This is not a joke and it's a concept that has grown on me since it was first announced. Those who say "Dumbo isn't dark" should take a second look. A circus elephant is orphaned when his mother is imprisoned for protecting him. In addition to being outcast by his own kind, his most humiliating feature is put on display every night. His only friend? An animal that should be his enemy. It's the stuff Tim Burton movies are made of... and I'm kind of excited about it. While the final film will most likely *not* be called Mary Poppins 2, it is being treated as a sequel to Walt Disney's 1964 masterpiece. Emily Blunt replaces Julie Andrews as Mary and it appears that Bert is not in the sequel, but Lin Manuel Miranda is playing Jack. He's a lamplighter, replacing Bert's chimney sweep, but I hope he's also a Jack-of-all-trades. Rob Marshall (Into the Woods) is set to direct. They've yet to announce who will be writing the songs, but I'd just like to point out that Richard Sherman is alive and still writing music...

The Nutcracker and the Four Realms The Nutcracker is somewhat uncharted territory for Disney, although Mickey's Nutcracker was a popular show at Disneyland and was filmed for Disney Channel. Plus the "Piano Concerto No. 2" sequence from Fantasia 2000 was reminiscent of the Christmas classic. This film promises to be a non-ballet version of the classic tale and should be a fun family movie during the holiday season of whichever year this lands in. No, Disney is not doing a live action remake of the first direct-to-video Tinker Bell film. Instead, this is an original origin story starring Reese Witherspoon. Rumor has it that Disney is also planning their own live action Peter Pan franchise and this could very well serve as a prequel-of-sorts. How chilling would it be to see Tink find baby Peter by the end of the film? Writer Victoria Strouse has a writing credit on Finding Dory, so we will soon know her strengths. I'm optimistic and this this will be much better than it sounds. Hopefully the recent Pan flop from Warner Brothers doesn't cast a grim shadow over Disney's efforts. BOOM! The film has already made half-a-billion at the worldwide box office and is likely to cross the $1,000,000,000 mark in a few more weeks, so how could Disney resist? I just hope it's better than the animated sequel. The new film is so amazing and I have faith in Jon Favreau, so if he returns I think this series could have legs longer than Colonel Hathi. I'd like to see Mowgli join the elephant army this time around and maybe become the new king of the bandar-log. 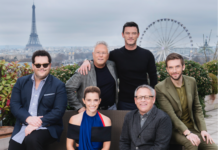