If you're looking for the next great digital board game, look no further than Disney Magical Dice, released by Netmarble and Disney. Choose your name and avatar and jump into a world of Disney with a new twist on fun board games you already know and love. Start your adventure by completing the helpful tutorial that will give you extra advantages upon completion, then choose the land that you want to play in, including a Mickey and Friends board, Fantasyland board, and more. Roll the dice and earn coins and cards to advance in building properties on the squares you land on such as Daisy's Garden and Cinderella's Castle. In winning and collecting coins, you can also unlock different costume cards for your avatar that include Cinderella, Rapunzel, Aladdin, Woody and more! With only a certain amount of time and rolls to finish the game, are you up to the challenge? I really like digital board games, and this one now tops my list! I was a bit of reluctance at first, as most games of this sort tend to, well, last forever. It's hard to finish these types of games when you have a moment to play them, but I was happily surprised when I went through the tutorial and learned that each game has a realistic time limit and a specific amount of times you can roll the virtual dice before the game ends. I really enjoyed building my own avatar and dressing it up in different costumes as I continued to play the game, as well as earning more coins to "buy" things such as the option to roll and even or odd number to give you an advantage over your opponent. Like almost every other game available now, you can make in app purchased, but I found it unnecessary. This is a great game to play with kids. With the multiplayer option with up to four players through the internet or bluetooth, connect with your family and friends for lots of Disney fun. With the familiar characters, Disney related spaces on the board and destinations, it's a great, well rounded game you'll find yourself going back to play over and over again. Download now for free on the Google Play Store of the Apple App Store. 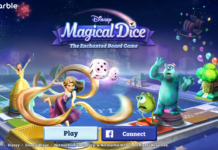