Whether you’re a fan of the ever-increasing DC Movie Universe or just a fan of movie costumes, you’ll find more than enough to interest you at DC Universe: The Exhibit. The exhibit opens to the public on May 24th as part of the Warner Bros. Studio Tour Hollywood. The Studio Tour is already well worth the price of admission and this exhibit makes it even more of a must-see for both tourists and locals. The exhibit features countless costumes and props from Batman v Superman: Dawn of Justice, as well as an early look at costumes and props from the upcoming film Suicide Squad, opening on August 5th. The costumes include three different versions of Batman’s suit, a highly detailed look at Superman’s suit, and the devilishly stylish costume worn by Harley Quinn. It’s certain that film and fashion fans alike will be pleased. There are even some vintage and coveted comic books on display for the true geeks.

As a special bonus during this special sneak peek event, legendary Kiss frontman Gene Simmons stopped by the exhibit and spoke briefly about his passion for comics:

Take a look at some early images from DC Movie Universe: The Exhibit and find more information on Warner Bros. Studio Tour Hollywood at www.wbstudiotour.com: 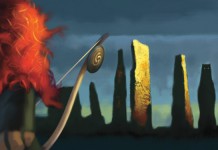 WDFM Event Recap – “Over There with Steve Pilcher”