After the enormous success of Frozen and Big Hero 6, expectations of Zootpopia were high. However, I don’t think anyone was prepared for the tremendous success of the film, which came close to outperforming Frozen’s box office numbers. It arrives on Blu-Ray and DVD on June 7th, one week after the film left the top ten box office charts.

Judy Hopps is a bunny determined to prove that she can be as good a cop as anybody. But when she is paired with Nick Wilde, a sly fox who is her polar opposite, the odds are stacked against her. When this unlikely duo uncovers a major crime, they will have to work together to save Zootopia.

While nearly every Disney animated film is an underdog story of sorts, Zootopia felt especially poignant to modern audiences. Kids will love the characters and the comedy, but adults in particular resonate with Judy’s tale of working hard to achieve her dreams only to find that the world doesn’t want her to succeed. Multiple parallels have been drawn, from women’s rights and LGBTQ issues to racism and political allegory.

In my opinion, the reason Zootopia has been so widely embraced is that it holds a lens to the dysfunctional aspects of human culture, using animals to bring humor and ensure that nobody is offended. But on top of that, it’s a charming story full of lovable characters with enough humor and excitement to keep everyone entertained. It’s a genuinely well made film, regardless of if you want to examine it closely or just take it at face value.

Now you can add Zootopia to your Disney movie collection with four different buying options. This review covers the Blu-Ray/DVD/Digital HD Combo Pack. One of the alternate options includes a 3D combo pack, a format Disney had previously abandoned (Frozen and Big Hero 6 are still unavailable in the third dimension on Blu-Ray). A standalone DVD release is another option, as well as digital-only from all major providers.

Zootopia is full of amazing details and there’s no better way to see them all than on Blu-Ray. Every hair on Judy’s head is expertly replicated and the wide color spectrum utilized in the film dazzles. The film’s settings contrast from bright and hot to dark and cold with ease.

On DVD, the film looks soft in comparison to the Blu-Ray. Many details are lost in the translation to standard definition, but the film looks as good as the format allows. The dynamic color range feels less wide in this version, with the brightest colors feeling dulled and the darkest feeling brightened.

The main audio track is a 7.1 DTS-HD Master Audio mix that is incredibly dynamic. The subwoofer gets used extensively, since the camera mostly stays at Judy’s height making something like a nearby elephant’s step an epic boom in this mix. Michael Giacchino’s score fills the rear speakers along with sound effects and ambient city noise. Other audio options include a 2.0 descriptive audio track and 5.1 French and Spanish Dolby Digital.

DVD audio options are English 5.1 and 2.0 descriptive audio, as well as the 5.1 Spanish mix. The French soundtrack is exclusive to the Blu-Ray disc and is not available on the DVD.

The only bonus features on the DVD are Scoretopia and the "Try Everything" music video.

Zootopia is housed in a standard-sized Blu-Ray case with disc holders on both sides of the interior. Inserts include a digital copy code redeemable through Disney Movies Anywhere or an individual provider via digitalcopyplus.com (iTunes, Amazon, Vudu, Google or Microsoft). The case is housed in an embossed slipcover in the initial pressing.

Both discs open with ads for Disney Movies Anywhere and Finding Dory. Selecting “Sneak Peeks” from the menu adds previews for Disney Movie Rewards, Disney Store and Girl Meets World. The menu features brand-new animation in the Zootopia train terminal, with lots of character interactions as they pass by.

Zootopia is one of the few films that can be heralded as an “instant classic,” with a 98% rating from Rotten Tomatoes and legions of fans singing its praises. It’s easy to see why the film had such a tremendous impact and with a stunning video and audio presentation plus an array of worthwhile bonus features, Blu-Ray is definitely the best way to go. 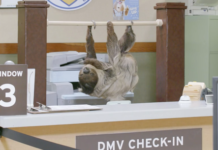 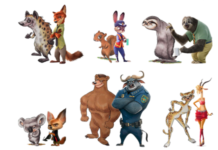