While Disney Junior’s Sofia the First is only midway through its third season, Disney Home Entertainment has assembled an eighth DVD collection of episodes with Sofia the First: The Secret Library. Each release has celebrated the arrival of a classic Disney princess in the series along with some filler episodes, but this release highlights two Disney characters. Merida from Pixar’s Brave pays everyone’s favorite princess-in-training a visit, but also Olaf from the evergreen franchise Frozen. All four episodes on this release come from the newest season.

The title episode of this release, “The Secret Library,” finds Sophia discovering a secret waterway underneath the castle. It leads her past relics from some familiar fairytales before discovering a secret library. When Sofia becomes the story keeper, she must complete the unfinished books by finding the characters to help them reach their happy ending. The first book chosen is about Minimus’ brother and in her efforts to free him, she calls on Merida to offer encouragement.

In “The Princess Ballet,” Sofia’s friend Princess Kari is great at everything. But as Royal Prep plans their Arts Day where the students must put on a performance for their parents, Sofia needs a third dancer for her ballet. Kari is chosen because her mother was a great dancer, but she struggles to learn the routine worrying she will disappoint her parents if the dance isn’t perfect.

Lastly, Sofia returns to The Secret Library in “Olaf and the Tale of Miss Nettle.” Sofia and Minimus travel to Freezenburg where Miss Nettle has removed all the flowers. When Nettle puts a spell on Sofia’s amulet, she loses her ability to talk to animals and when she summons a princess, Olaf arrives instead. Now Sofia and Olaf must use the power of friendship to set things right.

Like most Disney Junior DVDs, there aren’t any on-disc bonus features. However, the first pressing of this release comes with a physical bonus, described on the package as a “sparkling Sofia necklace.” It features the DVD artwork set in a metal frame that sparkles. The charm is looped onto a blue ribbon with a swirly pattern and a metal clasp in the back.

Sofia the First: The Secret Library comes in a standard-sized black DVD case. Inserts include the “sparkling Sofia necklace,” which is wrapped on a sturdy card that looks like the door to Sofia’s library and is protected by plastic wrap. Other inserts include a code for Disney Movie Rewards (75 points) and a flier for Disney Movie Club. The case is housed in a holo-foil embossed slipcover.

This disc is enhanced with Disney’s Fast-Play, which allows parents to pop the disc in and walk away without waiting for a menu to load. If you let it run its course, it plays an ad for Finding Dory before the episodes. Selecting “Sneak Peeks” from the main menu plays a promo for Disney Movie Rewards before repeating the Finding Dory trailer.

Disney Junior always finds a way to add value to their inexpensive DVD releases. If your little one loves Sofia the First, they will be delighted with the episodes on this disc and the bonus necklace. While Merida may not be a huge draw for your typical Disney Princess fan, the premise of “The Secret Library” is a lot of fun and the Olaf episode is the funniest I’ve seen in the series thus far. 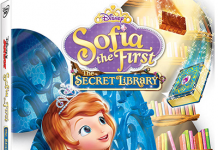 Sofia the First: The Secret Library Comes to DVD 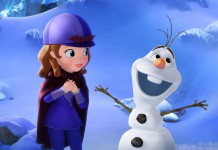