Disney Channel's remake of Adventures in Babysitting debuts on June 24th. As has become the new trend for the network, the 100th Disney Channel Original Movie will arrive on DVD that same day, allowing eager tweens the chance to see the film hours before it airs. But the best reason to own a DCOM on DVD is the ability to watch it over and over long after Disney takes it out of their weekly rotation. Sabrina Carpenter (Girl Meets World) and Sofia Carson (Descendants) star as Lola and Jenny, two art students with polar opposite personalities. After mixing up their cell phones, Lola accepts one of Jenny's babysitting gigs. But when one of the kids ventures off into the city alone, the two must team up with the children in their care to go on an outrageous rescue mission. This is no ordinary night of babysitting as they encounter evil pawn men, a rap battle, a rare sapphire ferret, and teen romance.

While the remake doesn't match the appeal of the Elisabeth Shue original, it still offers a fun adventure with recognizable Disney Channel stars that kids will love. The DVD arrives with a physical bonus and with plenty of time to cash in on the film's initial hype.

Adventures in Babysitting is available on DVD with three language options. The primary track is English 5.1, with French and Spanish 2.0 offerings available through the menu.

There is only one bonus feature on the disc, which is "Adventures in Outtakes," a blooper reel that lasts 1 minute and 40 seconds.

What will offer more appeal and more enjoyment for most purchasers is the "Magnetic Photo Frame" which has two uses. First, you can punch out the center to frame a picture of you and your BFFs with a colorful border featuring icons from the film. However, that middle section is a magnet that features babysitting rules, ideas for fun times and a space to write in emergency numbers.

The DVD case features case features three inserts. In addition to the magnetic photo frame, there is a code for 100 points through Disney Movie Rewards and a flier for Disney Movie Club. The case comes in a holofoil embossed slipcover

This disc is enhanced with Disney's Fast-Play, which can be skipped by pressing the main menu button. Allowing the disc to run its course plays an ad for Finding Dory before the film, followed by Disney Movie Rewards, Descendants mobile game and Girl Meets World after the bonus feature.

This remake of Adventures in Babysitting may not be as memorable as the original, but is sure to delight the current generation of Disney Channel viewings. With an affordable price and a keepsake inside the case, it won't take much to convince tweens that they should add it to their collection. It's clean, harmless fun from Disney Channel in the tradition of the 99 DCOMs that came before it. 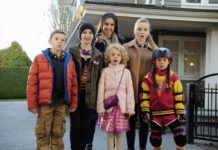 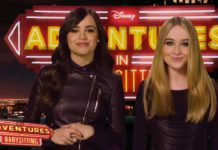 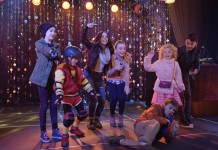 Adventures in Babysitting and Bizaardvark Get Premiere Dates