For many reasons, Disney's The BFG feels written in the stars. For starters, one of author Roald Dahl's first written works was The Gremlins, which was commissioned for Walt Disney as an animated feature that never got made. That book in turn inspired Steven Spielberg, who produced a very different kind of film based on Dahl's idea with 1984's Gremlins. And now another of Dahl's classic stories has been adapted as a feature film from Walt Disney Studios, directed by Mr. Spielberg himself.

In recent years, Steven Spielberg's focus has been on directing historical pieces that don't allow him to expand on the story without altering facts. The BFG is a return to form for the creative director who hasn't made this type of film in a long time. "This movie for me was a tremendous relief, where all I needed was my imagination and my respect for Roald Dahl’s writing to be able to say 'This is going to be the most fun I’ve had in a long time,' and it was." One of the reasons Spielberg has been so successful in his career is that he's very collaborative. The screenplay for The BFG went through many drafts before and after Spielberg took the project. "With the permission of the Roald Dahl estate, we were able to add plot that’s not in the book, to make it more of a three act story." One of Spielberg's criticisms of the piece was that it felt slow paced. Melissa Mathison, who wrote the screenplay, explained to the director “Now Steve, you know that this isn’t one of your Indiana Jones movies. And you should just relax, because this is going to be a story where the pauses are as important as the words I’ve written, and the words Dahl has written - the pauses, the spaces, the patience of the storytelling. Don’t rush it, because it doesn’t work rushed. It only works unfolding the way it’s unfolding.” Spielberg appreciated her sage wisdom. "That was the best advice she could give me, and she was absolutely right. Film has its own biorhythm, and you can’t push it. You just can’t." Sadly, Melissa Mathison passed away during production on The BFG. Her other works include E.T. for Spielberg, Ponyo for Disney, and this film is dedicated to her memory. Most of Roald Dahl's classic books have already been adapted for the big screen, except for The BFG, and the main reason is that the technology to do it justice hasn't existed until recently. "The whole nature of my approach to The BFG was to be able to use technology to advance the heart, and create a flawless transposition between the genius of Mark Rylance, to the genius of Weta, as they were able to digitally translate Mark’s soul onto film in the character of the BFG... Five years ago, we could not have made BFG this way - the technology wasn’t there for it."

Mark Rylance was cast as the BFG while filming his academy award winning performance in Bridge of Spies. Young Ruby Barnhill was cast as Sophie after an 8-month casting search and was flown to Berlin to meet Spielberg for the first time. Before she was given the part, she and Rylance had an improvisational screen test at a table full of vegetables. Without a script, the two used the Roald Dahl book as a reference for their characters. Ruby remembers thinking “Oh, whoever gets to work with him is going to be so lucky, because he’s such a nice and gentle guy.” Luckily, she was the perfect young actress for the role and soon found herself spending a lot more time with Rylance.

Rylance recalls Spielberg being stressed when the shoot started. "I think Steven’s so fascinating about being on the cutting edge of technology, and the fact that in Avatar there are only two moments where a motion capture character and a real character interact. And they were a little bit rough." Looking back at James Cameron's box office juggernaut, it's easy to see that the technology hadn't arrived at a place that would allow live actors to blend seamlessly with motion capture for an entire film. "But this whole film is about that, so he was really stressed on the first day, the first week." In many ways, The BFG feels reminiscent of some of Spielberg's earlier films, particularly E.T. "What really appealed to me was the fact that the protagonist was a girl, not a boy. And it was a very strong girl. And the protagonist was going to allow us to believe that four-feet tall can completely outrank 25-feet of giant. And I got very excited that this was going to be a little girl’s story, and her courage, and her values, was going to, in a way, turn the cowardly lion into the brave hero at the end, which is what she turns BFG into. And I saw all kinds of Wizard of Oz comparisons when I was first reading the book, and I said “Oh, here’s a real chance to do a story about Dorothy and the Cowardly Lion - just the two of them.”' But in many ways, it feels like a chance to revisit Elliott and E.T. as two unlikely friends from different worlds meet and impact each other's lives in profound ways. To see Steven Spielberg return to this type of storytelling with source material from Roald Dahl is nothing short of a "Golden Phizzwizard" (You'll understand that reference once you've seen the film). 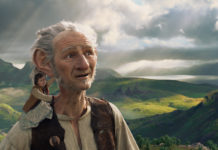