While the world is still celebrating the opening of Shanghai Disneyland, it's worth noting that not every Imagineer dream comes true and not every planned Disney Park gets built. On November 11th, 1993, Disney’s America, a theme park that would celebrate the nation’s richness in a historically detailed environment, west of Washington D.C. in Prince William County, Virginia was announced with enthusiasm as the next big expansion for Disney Parks.

Disney Chairman and CEO Michael Eisner announced in the press release for the new park that “In ‘Disney’s America’ we will create a totally new concept using different strengths of our entertainment company – our motion picture and television unit, our park Imagineers, our interactive media and publishing executives as well as our sports enterprise and education executives – to celebrate those unique American qualities that have been our country’s strengths and that have made this nation the beacon of hope to people everywhere.” The Disney Company was fully committed and swinging for the fences on this newest expansion in the United States.

Disney’s America would be meant to celebrate the diversity of the nation while not ignoring the conflicts that helped build the country. Bob Weis, senior vice president of Walt Disney Imagineering in 1993 said the park was, “An ideal complement to visiting Washington’s museums, monuments, and national treasures.”

The park wouldn’t just be about the thrilling attractions that Disney was well known for. Weis saw Disney’s America as, “A venue for people of all ages, especially the young, to debate and discuss the future of our nation and to learn more about the past by living it.” Plans to host and televise political debates, public forums and gatherings of writers, educators, journalists, students and historians to discuss the issues of the past, present and future were on the drawing board for Disney’s America. The park would consist of nine themed lands:

Crossroad USA – This would be the hub of the park. Guests would enter the park into a Civil War era village.

Native America – This area would be based on a Powhatan Native American Village. Guests would have the chance to see a variety of mid-Atlantic tribes presented in this one amalgam village. A thrilling white water rafting attraction themed to the adventures of Lewis and Clark would have been the centerpiece of the land.

Civil War Fort – An authentic recreation of a Civil War fort would have made up this land with battlefield reenactments taking place on the surrounding land daily. At nighttime, guests would have been thrilled by the nightly reenactments of the Civil War naval battle on the adjoining bay between the ironclad ships Monitor and Merrimac.

We the People – A recreation of Ellis Island, this land would have told the story of the millions of immigrants who came to America for a better life. A Muppet-themed movie would have been placed here with the Muppets providing a hilarious take on immigration.

State Fair – The wonder of Coney Island would have been rebuilt here with a sixty foot Ferris wheel, a wooden roller coaster, and a live show about baseball.

Family Farm – Guests would have the chance to experience the different types of food production that takes place in America. How to milk a cow and make ice cream would have been two of the hands on experiences for guests.

Presidents Square – The focus would be on the founding fathers and the birth of democracy in America. The Hall of Presidents would have played a prominent role in this area. It would have moved from Magic Kingdom in Florida or a clone of the attraction would have been built.

Enterprise – The American factory town would have been represented here. Technology and the advancement America has made through innovation would have been the highlight of Enterprise. An E-Ticket roller coaster ‘Industrial Revolution’ would have taken guests on a harrowing high-speed ride through a turn of the century steel mill.

Victory Field – The life of an American soldier during the world wars would have been presented here. The land would have been laid out like a typical airfield with hangars and virtual reality attractions placing guests in military combat would have wowed any visitor. Disney’s America would also include a water park, 27 hole golf course, 300 campsites, a hotel themed to a 19th Century Civil War lodge, and convention center. The resort was planned to open sometime in 1998. Over three thousand jobs would be created, and over $1.5 billion in tax revenue was estimated to be generated from the park over the next thirty years.

Virginia Governor George Allen was so excited by the prospect of what Disney’s America would do for the state he personally led the charge in the state legislature to pass tax breaks and other helpful bills that would allow Disney to build the park. But there is no Disney’s America. The nine lands of history would never be built in Virginia and the economic boon that Governor Allen and many others envisioned would never materialize.

So what killed Disney’s America?

The answer is complex and multi-faceted.

Haymarket, Virginia where the park would have been built and the surrounding Prince William County was the home to a multitude of battlefields and historic sites. The rolling landscape and the preservation of this area was of the utmost concern to some local groups like the Piedmont Environmental Council (PEC). While many saw the coming Disney Park as a chance for growth and money that would fill everyone’s pockets from the government to the local business, PEC saw the destruction of the country life from corporate America. Manassas National Battlefield Park site of two deadly Civil War battles was just minutes down the road from the proposed site of Disney’s America and some opponents didn’t want the blood spilled on that battlefield obscured and forgotten by the neon signs of a theme park. The idea of Mickey Mouse consuming American history was abhorrent to many, especially on such hallowed ground as this area.

While Disney countered with the jobs and money that local residents would stand to make, everything from increased property value and new business with the planned six million tourists that were expected to visit the park annually, it seemed like Disney’s America was a fait accompli. But the battle for Disney’s America was far from over. In May of 1994, Protect Historic America (PHA) which counted noted authors and historians like Shelby Foote, David McCullough and James McPherson joined in the protest at what they saw as the destruction of history. What seemed like just a local zoning fight was now a national discussion about the history of the country and how it was preserved. To make matters worse at roughly the same time opponents of the park were getting stronger and more positive national media coverage, the Walt Disney Company was in crisis. Frank Wells, President and Chief Operating Officer of the company was killed in a helicopter crash. His death led to an internal battle between Eisner and Jeffrey Katzenberg over who should fill Wells’ job which led to Katzenberg leaving the company. With all this turmoil, the message of what he company hoped to accomplish with Disney’s America was lost in the headlines of newspapers.

A small but united opposition stuck to one message, and that was that this historically rich and diverse area of Virginia was the wrong place for another Disneyland despite its historical aspirations. Facing internal fights over the direction of the company, and the growing national opposition about Disney’s attempt to rewrite history, Eisner announced that Disney would abandon its plans for Virginia in September of 1994.

Michael Eisner conceited that the public relations aspect of Disney’s America could have been planned better. At a conference in Walt Disney World, only eleven days after announcing Disney’s America, Bob Weis said, “How can you do a park on America and not talk about slavery? This park will deal with the highs and lows . . . We want to make you feel what it was like to be a slave, and what it was like to escape through the Underground Railroad." Editorialists and cartoonists lambasted the company for its attempt to cash in on the history of the nation without showing the truth behind such events like slavery. How could a theme park appeal to kids, and show the truth behind the nastiness of human slavery? The answer is that it couldn’t.

Despite the public outcry at the time, Disney’s America will not go away. When plans were being considered for a second gate at Disneyland, the Walt Disney Company thought long and hard about purchasing Knott’s Berry Farm and remodeling it into Disney’s America. The Knott family did not want to sell to Disney, so the plans were scrapped. In June of 2015, when Sweet Briar College in Virginia was announced it would close, speculation was that Disney’s America would rise again in Virginia. Nothing has been announced since except denials of the secret revival. The legacy of the Disney's America project

Today, many planned attractions for Disney’s America can be seen in Disney California Adventure, like the Lewis and Clark Expedition which was turned into Grizzly River Run, the wooden roller coaster of State Fair would become California Screamin’, the sixty foot Ferris wheel would also find a home as Mickey’s Fun Wheel. In fact, two distinct lands of Disney’s America would find a home in Disney California Adventure. State Fair would be the model for Paradise Pier and Victory Field would become Condor Flats (which is now Grizzly Peak Airfield).

The idea of Disney’s America was something that harkened back to Walt’s own beliefs for Disneyland. From 1957-1959, Walt had worked at the idea of creating an area off Main Street in Disneyland called “Liberty Street”. Financing and new projects kept Walt from actually building his planned historic area.

Disney’s America could have been a place where people came together to discuss and learn about the history of their country. Daily trips to the many historic sites that call the area of Prince William County, Virginia home could have been run out of Disney’s America. I wonder if the Walt Disney Company had brought all shareholders in on the planning stages for the park, would there have been such a vocal opposition. Rather than consuming the historic and sacred lands that would be neighbors to Disney’s America, perhaps they could have worked together. Rather than being lambasted as the destroyer of history and the appropriator of the national identity, perhaps Disney would have been seen as a true collaborator and preserver of US history. Most opponents of the park had no objection to the park, just the location. Imagine if Disney’s America was located in another county — I wonder how popular it would be?

For one, this Canadian would have visited Disney’s America annually. 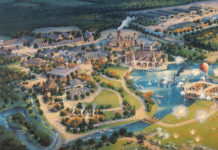