On July 2nd, the Coca-Cola Store Orlando opened as part of the ongoing expansion of Disney Springs. This is only the third such store in all of the U.S. and offers a unique rooftop beverage bar along with several Coke merchandise offerings. Modeled after a 1920's Coca-Cola bottling plant with its brick exterior hidden behind the green glass paying tribute to the original Coca-Cola bottles, it fits in perfectly with the overall theme of Disney Springs. Once inside, guests are greeted by a 30-foot-wide blown-glass chandelier crafted from repurposed Coca-Cola bottles and hundreds upon hundreds of differenCoca-Cola branded items for purchase. But it wouldn't be a grand opening without some limited edition merch and it wouldn't be Coca-Cola without its trademarked bottle, so why not combine them for special LE 500 Coke and Diet Coke bottles selling for $29.95 each? The other iconic image that most think of when Coca-Cola is talked about is, of course, the Polar Bear who is well represented in plush. He will also be joining the store for hugs, photos, and high-fives in August. While shopping is all fine and good, the highlight of Coca-Cola Store Orlando for most will be the rooftop beverage bar. This unique area offers guests not only a wide variety of beverage options but also provides a stunning view of Disney Springs. Looking at the menu, you could spend many a visit before even stretching the surface of all the offerings available, but really the best way to go is to do the Combo Sample tray. For just under $15 you not only get the Float Tray with some of your favorite Coke products along with small scoop of Häagen-Dazs Ice Cream, as well as samples of 16 differentCoca-Cola products (including everyone's favorite: Beverly) from around the world as part of the International Tray. Some of the other options include mini cans and bottles, Mexican bottles, as well as coffee and Surge to get you that extra shot of caffeine. Plus, starting July 8th, there will be alcoholic offerings in the evenings. The Coke Freestyle Machine options give you five refills in a hour's time, but what really got one LaughingPlace editor very excited was the specialty drinkware option which, when asked about to a Cast Member, didn't have any end date to $1.00 refills.

Not that Disney Springs wasn't already becoming a full day experience, but, with this latest addition, it is now a WDW must-do! 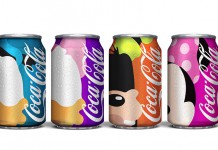 How Much Do You Want These Disney Coke Cans?