Disney Channel has always had their pulse on what kids are into. That trend continues with their newest sitcom, Bizaardvark. The series premiered on June 26th and tells the story of two teenagers who make silly YouTube videos for a living.

The name "YouTube" and all Google branding has been replaced in the series by "Vuuugle." In the pilot, we are introduced to best friends Paige and Frankie and their web series, Bizaardvark. When they hit 10,000 subscribers, they are invited to Vuuugle headquarters to make their own videos. The girls quickly learn that expectation vs. reality can be quite different once getting to Vuuugle. In addition to not fitting in with other video stars Amelia and Dirk, the head of Vuuugle doesn't understand their quirky sense of humor. They will have to learn to be true to themselves in order to fit in.

Each episode features a few videos from Paige and Frankie, which are the highlight of the show. The first one in particular, a music video tribute to a blobfish, had me laughing out loud. The rest of the show is tolerable, but feels like filler while waiting for their next Vuuugle vid.

Olivia Rodrigo and Madison Hu play Paige and Frankie, the stars of the show. It's nice to have some more diversity amongst the Disney Channel lineup of stars, but it also feels like the supporting cast is exclusively blonde white kids. But all of the actors seem to have a lot of fun with their roles and their enthusiasm is infectious. Bizaardvark fills a void on Disney Channel that hasn't been filled since Sonny With a Chance/So Random! went off the air. Like those shows, it offers some fun sketches interspersed with some less interesting behind-the-scenes filler. But the best part is that the videos are not only funny, but often feature catchy music that you'll be humming afterwards. 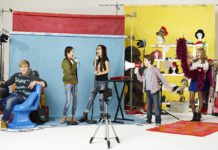