The Shanghai Disneyland Resort has been officially open for just under a month now and is getting close to surpassing one million visitors! I was lucky enough to be among the first thousand or so to be there on opening day, but the park will be covered much more in the next update as this one will be about the Toy Story Hotel. Having stayed in all three of the Disneyland Resort Hotels and many of the hotels on each of the levels at Walt Disney World, I would put this in the moderate range for WDW or a bit above the Paradise Pier Hotel for DLR. The feel this hotel is along the lines of Art of Animation at WDW with oversized photo ops and just only food court/quick service dining options, but the rooms and amenities are differently a step above which is why I put it in the moderate range. This lobby area is smaller with only six to eight check-in/out spots for guests and a guest service desk for ticket purchases, dining help, and local assistance. The hotel itself is separated into two wings — Buzz and Woody — with the quick service and the counter service dining options are named after the Sunnyside Preschool from Toy Story 3.

The Sunnyside Market is the grab and go location staying open until almost midnight and offering a variety of drinks, sweet treats, and warm options after the late night in the park. The Sunnyside Café offers many options from breakfast to dinner with a large seating area for the casual dinning. For shopping, there is the Lotto Shop, for all your Toy Story needs! One thing about this hotel is it is themed to the nines! To see what really puts this hotel at the top of my list, head to the next page. 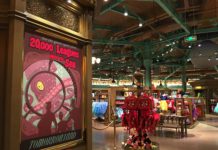 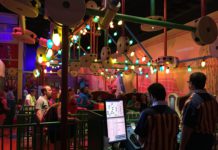