Fellow "foolish mortals," I can't tell you how excited I was when I first learned of a new Disney Press book series called Tales from the Haunted Mansion. The description not only advertised that the books would look like they belong on the shelves of the mansion's handsome library but also stated that each book "tells the story of one of the Haunted Mansion's 999 ghosts." If you're getting giddy with anticipation reading that description, then you and I are on the same page. Unfortunately, the author was not.

If you were tasked with writing an expanded universe series for The Haunted Mansion, which frightful spook would you have started with? I personally would have chosen a biggie, someone like Madam Leota, Constance the bride, or perhaps the legendary sea captain. But volume one is subtitled "The Fearsome Foursome." Who could that be? Well there are four singing busts, so that seemed like a reasonable choice, right? Wrong, but I'm getting ahead of myself.

When this chapter book aimed at kids between the ages of eight and 12 begins, you are introduced to the "writer," Amicus Arcane. He's the mansion's librarian and will serve as your "ghost host" not just for this book, but the rest of the series as well. Who is the fearsome foursome? It's a group of four teenagers who like to tell each other spooky stories, each attempting to one-up each other. But when these four storytellers stumble into the Haunted Mansion, they are trapped by Amicus Arcane who decides to tell each of them a spooky story about themselves.

Sound disappointing? It gets worse when the book describes cell phones and Taylor Swift and you realize that not only is this not about any ghosts from the attraction, but it also takes place in 2016. Not only did I feel mislead by the title and the premise, I was deeply bothered by The Haunted Mansion's good name being dragged down by what ends up being four abridged Goosebumps books stringed together in a shiny package.

The four short stories find each teenager fighting for their lives, but don't necessarily involve ghosts. An Idle Hands rip-off about a demonic baseball glove that controls its owner kicks off the book, followed by zombie pets attacking their former owner. The only story I found enjoyable was about an old mail-order sea creature kit (think Sea Monkeys, but cool) that becomes a prehistoric monster in a boy's backyard pool. And lastly, a story about a dare gone wrong that finds a human boy buried alive by accident. I have nothing against R.L. Stine, who got me to read books as a child, but this is not at all what I wanted from a Haunted Mansion branded series. Even as a kid, I would have been extremely disenchanted by this.

There's so little Haunted Mansion in this book that its name on the cover left me in disbelief. Other than a description of the exterior, the only time you start to experience anything from the attraction comes in the final 15 pages. However, Imagineering buffs will notice a few nods to the attraction's history, including a minor character named Rolly (presumably named after Rolly Crump) and several references to the raven throughout the stories. But all of this is too little, too late to save this book, and presumably the series if it stays on this mediocre path.

Obviously, this book has a ghost writer, who is credited at the very end as John Esposito. I had already drawn a comparison to him and R.L. Stine in my head before getting to his bio, where I learned he is primarily a TV writer who worked on his TV series, The Haunting Hour. Now it all makes sense, but sadly any Haunted Mansion fan could likely write more compelling fan fiction around the mansion's ghosts than anything conjured up in this chapter book. The illustrations by artist Kelly Jones are a nice touch, but content is key and this content doesn't have the right skeleton key to access the allure of The Haunted Mansion.

It's a shame that Tales from the Haunted Mansion falls so far from what it should have been. Given the attractions' huge fan base, this series could have been a top seller appealing to both adults and kids, possibly launching a TV and/or film series (we all know The Haunted Mansion deserves a good film adaptation). Unfortunately, this is exclusively kiddie fare and to be honest, kids will likely be as disappointed as I was.

Disclaimer: This title was provided to us by the publisher for review purposes. 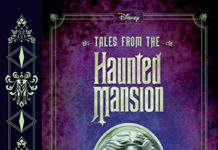