It’s the dying days of summer holidays and Disney Channel is looking to scoop up as many eyeballs as possible for their short form video series called Free Period. Released on the Disney Channel app and on Youtube the twelve short form movies range in length from eight minutes to almost half an hour and cover a variety of topics. This partnership with Maker Studios has brought new content featuring many prominent Disney Channel actors. How can I best describe the twelve short form movies? Highly enjoyable for the most part. As I sat and watched these movies I couldn’t help but think about free reading period in school when our teacher would give us the opportunity to choose a book to read and the content of these books would be varied from a young teen dealing with a robot who lives next door or solving the mystery about the ghost of some lake. Obviously these movies were not filmed with a mid-thirties guy in mind, but they brought about these memories for me.

Of the twelve, the highlights for me were Abby Normal, Arcanum, How to Catch a Ghost, Nelson Bixby Takes on the Whole Wide World, and Virtual High.

Abby Normal: This is the quintessential story that has filled so many chapter books for kids. Abby and her cousin Zoe begin an adventure that involves them using all of their Nancy Drew skills to determine if the neighbor across the street from Abby is normal. I think I must have read a hundred books with a similar plot to this while in elementary school, and I loved every one of them. Who hasn’t had a neighbor that they wondered about?

Arcanum: The Indian Jones fan in me was hooked from the opening scene news report describing the recently discovered ancient ruins in Antarctica. But the story carries on with a Harry Potter vibe with a questionable character in the form of a librarian who has plans of his own and supernatural powers. A young biker teen comes to make a deal with the librarian and they set off together to explore the ruins in Antarctica.

How to Catch a Ghost: Yet again another classic story about moving into a new home to find ghosts still living there. But rather than being scary or angry ghosts, they just love to dance. It was a fun film that humanizes ghosts, how often does that happen?

Penelope in the Treehouse: The first thirty seconds of this story is definitely an homage to everything Dr. Seuss and Roald Dahl. From the surreal imagery like the massive tree Penelope grew with the Gro Kwik powder, this is imagination overload. But the story is very real. Penelope is afraid her mother will forget about her for her step father’s children, so she runs away to her treehouse. The story ends happily, but the message of the story is something any kid from divorced parents can relate too. Life is hard to adjust to, but running away doesn’t solve the problems.

Nelson Bixby Takes on the Whole Wide World: Continuing with the ghost theme, Nelson Bixby is an 11-year-old who gets help from the ghost of the famous Mexican wrestler “El Nino!” I liked this one in particular because Nelson Bixby is a great example of most 11-year-olds. Approaching your teen years, life gets hard, and it would be nice to have a guardian angel or wrestler ghost helping you along.

Nu Skool Records: I highlight this short film as interesting because in today’s day and age, a high school student can hit it big in music simply by recording themselves and putting it on Youtube, that’s how we got Justin Bieber. The story is all about a group of teens who collaborate together to create their own record label at school. This is not impossible now, and the fact that what they do in the film is possible makes it worthwhile to watch. The film even starts with the text, “based on a true story, sort of.”

Parker and the Crew: Kids come together to stop bullies from ruining the summer. Not a new concept for a film. Overcoming bullies is an obstacle that most young characters have to deal with in books and film since time began. The diverse cast is what makes this story unique. The main character of Parker being a girl doesn’t just appeal to girls, but helps to broaden the audience for this timeless tale. It doesn’t matter what gender or ethnicity you are, everyone will experience a bully. How you choose to confront the problem is what will be different.

Trunk: Watching two brothers as they bring their toys to life with the power of the magical trunk was fun, but the message of what seems to be a good thing can almost destroy you is a powerful message to cram into a short film. The dialogue between the two brothers reminded me of many fights from my childhood with my two older brothers but I was impressed with the scope of the story in this short frame.

Virtual High: I have always been fascinated with virtual reality since Star Trek: The Next Generation introduced the holodeck, and it seems like we are closer now to achieving what so many writers have dreamed of. Sophia is our guide through the virtual school that looks like a dream come true. Of course the story is simple, Sophia is trying to get the attention of a boy, but this is a real issue that many kids face in school, how do I stand out and be seen. It just so happens that this story is taking place in the greatest school ever.

While I applaud the creativity put into Hamburger High and the Free Period videos, I just didn’t enjoy them. Hamburger High is led by the video diary of Lisa Pizza a slice of pepperoni pizza recording her first video blog. As Lisa goes to school and interacts with the other food characters, the story just didn’t appeal to me. Perhaps it is an age thing, and someone younger might really enjoy the antics of Lisa Pizza and her friends.

Free Period is about the wacky random acts that spring from the mind of writer/star Kent Boyd as he sits in free period class. From a puppet for a teacher to a carrot as a classmate, nothing is too wacky. I felt like there were too many random ideas coming out and it cluttered up the story that kids can daydream about the weirdest things while in school. Then again maybe this film would best appeal to a younger audience.

Exchange: This story had a unique premise that when a study abroad program was cancelled the students switch houses and live with other families. For me to really enjoy a film, television show, or book, I have to connect with the characters, and I just couldn’t do that with Exchange. There were moments of humor that made the film funny, but not enough to sustain my interest.

The best part about the Free Period movies released on Disney Channel is the content is varied, the actors are diverse, leaving something for everyone. I am not the target age for any of these movies, but as I watched them, I could certainly connect with most of them. There are even a few films in this list that I would definitely use in the classroom.

If you are looking for new content and multiple new spins on well-used story arcs, then the Free Period short movies are definitely worth watching. You may not enjoy all of them, but you will definitely find something of interest. I know I did. 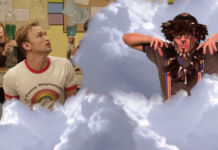