Star Wars Rebels takes place at a unique time in the Star Wars timeline, between Revenge of the Sith and A New Hope. As a result, it not only satisfies fans of the original trilogy, but also fans of the entire saga. From the same creators as Star Wars: The Clone Wars, a new adventure has emerged.

Season one introduced us to Ezra, an orphan who found himself joining a crew of rebels fighting to save people form the evil plans of the Empire. Learning the force from one of the few surviving Jedi, Ezra and the crew of the Ghost fought the empire’s minions, leading to an exciting encounter with Darth Vader himself.

The second season picks up right where the first left off and now all 22 episodes have been assembled in this Complete Season Two Blu-Ray release. Spread across three discs, fans can relive these exciting adventures along with an assortment of bonus features that help reveal some hidden items and clues to where the series may be going in the future.

Fans of The Clone Wars are treated to even more characters from that series becoming regulars here. Ahsoka Tano faces off against her former Jedi master and Captain Rex proves that not all storm troopers went bad after Order 66. But for me, it was appearances by Lando Calrissian and Princess Leia that kicked my fandom into overdrive.

Season two manages to improve upon season one in almost every way and Star Wars Rebels appears to be heading into an exciting third season. If you haven’t seen these episodes yet, or if you wanted to re-watch them in advance of the new season, there’s no better way to do it than with this Blu-Ray release.

Star Wars Rebels offers fairly simplistic computer animation and no extra detail is revealed in comparison to the HD cable broadcast. However, Blu-Ray handles colors better and the spectrum in this series is vast, with lots of dark blacks and earth tones contrasted against bright whites and neons. I was also unable to detect any flaws with the transfer that aren’t native to the source material.

The series is presented in 5.1 surround sound in both English and French. While nowhere near as immersive as any of the Star Wars films, it does utilize the rear channels for sound effects and explosions rumble through the subwoofer. A Spanish 2.0 track is also available.

Star Wars Rebels Complete Season Two is housed in a standard-sized Blu-Ray case with disc holders on the inside cover. The case uses stacked disc holders to keep all three discs in place. Inserts include a code for 150 points from Disney Movie Rewards and an ad for Disney Movie Club. The case is housed in an embossed slipcover and the design matches the look of the Complete Season One, keeping continuity between both releases.

None of the discs have forced ads before the menu loads. However, disc one has a “Sneak Peeks” section which leads to a single ad, the most recent trailer for Rogue One: A Star Wars Story.

Star Wars Rebels Complete Season Two offers a great package for fans hoping to collect the entire series. Aside from the web series, the bonus features are very light this time around, but the video presentation and series completeness should satisfy fans hoping to relive these adventures before season three begins. 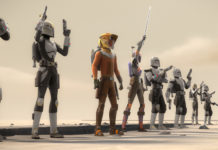 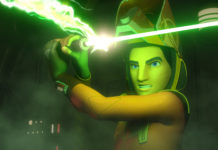