Tomy’s latest Miles from Tomorrowland toys allow you to create new adventures for the Callisto family. The Stellosphere is multiple ships in one. With a simple raise and pull, the Zip Ship (a smaller ship) pops off the back and the Stellosphere opens to becomes a base ship set. This is a surprisingly big toy so we were glad for the smaller ships to fly around more frequently as, all together, it’s a bit heavy. The panels and inside displays are included with stickers that we placed on ourselves. They were easy to attach and adjust if needed. In our case, my little guy enjoyed doing it himself and I was able to make adjustments if the stickers were hanging over the edges making them easier to dislodge.

Also inside the home base is what they call the charging chamber. When you place a figure here and push the button, the tiny black light causes them to glow as if they are being powered up for the next space exploration. Turn the Stellosphere over and you can pull the propulsion unit off and snap it onto the included Star Jetter or a number of sold separately vehicles to add wings, lights and sounds. They call it the cross vehicle rocket system or XVR. We found it a little challenging to move the XVR from the Stellosphere to the included Star Jetter, but not too frustrating — it just requires more force than you’d expect. My little one was nervous to pull or push so hard on his new toy.

Trigger the sounds with a simple press of the button on top of the engine. While the engines are illuminated takeoff and landing sounds will be automatically triggered whenever the toy is lifted or placed back on the surface. With the volume switch set to the speaker icon, the XVR system makes a variety of engine sounds. Switch it to the other icon and you get a mix of Miles quotes along with engine sounds. As the mom, I appreciate that, after a few moments of non-play, the engine lights turn off and the auto sounds will shut off, so the toy can be moved around without the recorded effects.

Overall, my little dude gave it 4.5 out of 5. It's big. Lots of options. Great sounds. But he said it wasn’t a 5 because it was hard to switch out the XVR.

You can also check out our review of TOMY's Mission Rover on YouTube. 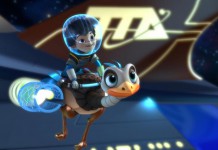 “Star Trek: The Next Generation” Alums to Guest Star in “Miles From Tomorrowland” Season 2 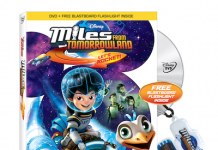