2016 taught Hollywood a tough lesson about sequels: You should only make them if your audiences are demanding them and you should give them exactly what they want. Some of the years’ biggest blockbuster flops include The Huntsman: Winter’s War, Ghostbusters, and Zoolander 2. Sadly, there is a Disney release to add to this list, Alice Through the Looking Glass.

Released six years after Tim Burton’s Alice in Wonderland, the sequel makes a number of big mistakes. The biggest, losing the acclaimed director who has a unique and diehard fan base. The second is Time, both as in the distance between the two films and also as a weak main character. And the third is a thin plot that relies on your love of Johnny Depp as the Mad Hatter in order to feel emotionally invested. These are serious crimes for a film with a budget close to $200 million.

Having returned from her sea voyage, Alice finds hew power threatened by a man she scorned years ago. Returning to Underland by way of a mirror, she discovers that the Mad Hatter has lost his “Muchness.” Now she must break the rules of Time, an actual person who controls the ticking of the clock, to travel back in time to fix the Hatter.

The first film made $330 million domestically and $1 billion worldwide. This helps put into perspective how big of a flop Looking Glass was, which earned $77 million domestic and $299 million worldwide. And while most sequels are almost guaranteed to make less than the original, 70-80% less is a larger than average decline. There was very little buzz around Through the Looking Glass when it was announced and even less when the trailers debuted.

As evidence that Disney had bigger expectations for Alice Through the Looking Glass, the film arrives on Blu-Ray with more bonus features than the first film received. Now available as a Blu-Ray/DVD/Digital HD combo pack or standalone DVD, you can bring home this sequel. Thankfully, it’s one of the studios’ few duds from recent years. (Note: There is no 3D release in the US, but fans can import it from the UK).

Alice Through the Looking Glass is presented in its original 1:85:1 aspect ration in 1080p. Wonderland’s vibrant color palette is expertly rendered in HD and the Blu-Ray offers a stunning presentation with a tremendous amount of detail.

The DVD loses a lot of detail and clarity in comparison to the Blu-Ray and also offers a more pastel looking color palette.

The default audio track on Blu-Ray is a 7.1 DTS-HD Master Audio mix. It’s an engaging mix that puts you at the center of the action and gives the subwoofer a lot of work to do. Other options include a 2.0 Descriptive track, plus French and Spanish in 5.1.

All four audio options are available on DVD, except for the 7.1 mix which has been replaced with a 5.1 condensed version.

The only bonus feature on the DVD is “A Stitch in Time: Costuming Wonderland.”

The standard Blu-Ray case houses both discs on either side of the interior. Inserts include a flier for Disney Movie Club and a single generic sheet that features your Digital Copy/Disney Movie Rewards code. The case is housed inside of an embossed slipcover that swaps the white mirror found beneath with an actual reflective surface around the title.

Both discs open with ads for Disney Movies Anywhere, Beauty and the Beast 2017, and Finding Dory. Selecting “Sneak Peeks” from the main menu plays additional ads for Disney Movie Rewards, Rogue One: A Star Wars Story, Shadowhunters, and Once Upon a Time.

It is my opinion that Alice Through the Looking Glass is not worth owning. However, fans of the film will find stunning picture and audio quality and some worthwhile extras on this Blu-Ray release. For everyone else, I recommend remembering the 2010 film for what it was and not tarnishing it with this poor follow up. 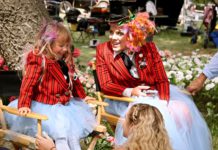 Alice Through The Looking Glass Comes to Home Video