After the loss of her mother, 15-year-old Skye returns with her father to North Star Lodge, the family-owned country hotel where her mother was raised years ago. Eager to make a fresh start, Skye forges friendships with the locals who live and work at the lodge, but when she learns her father is planning to sell the place that holds so many treasured memories, she is determined to find a way to change his mind. Now, she must lean on her newfound friends to help, although all may not be as it seems.

“The Note” – Milo and the gang spend the entire day chasing after his doctor’s note that excuses an entire semester of absences, illness and shenanigans
caused by Murphy’s Law.

“The Reemen” – Horrifying creatures from another dimension invade Danny’s house.

“The Expedition” – An expedition continues.

While the CIU team vociferously disagrees among themselves whether the “bad guys” also deserve justice, they work to exonerate a political activist with questionable views. He is serving a life sentence for planting a bomb at a mosque that killed a prominent Imam and three worshippers. The re-examination of the case calls into question the NYPD’s role which puts Hayes in Wallace’s crosshairs. After a rigorous analysis of the evidence, the stunning conclusion to the case leaves one member of the team strongly dissatisfied with the outcome. Meanwhile, just as Hayes and Wallace seem to be getting cozy, they discover that their worst nightmare has been realized. Skye convinces her dad to hold off on selling the lodge and enlists the help of her new friends to give it a makeover. In order to generate publicity for the newly renovated lodge, Skye lets the "My Amazing Life" reality show take up residence to document the goings on. Meanwhile, Kaylee performs a song she and Noah produced during the first "music night" at the lodge.

When a devastated Sue discovers that she has been kicked out of college because she forgot to renew her financial aid, Mike tries to come to her rescue and convince a tough college bursar to reinstate her. Meanwhile, having only taken oral liquid medication all of his life, a frustrated Frankie does everything in her power to teach Brick how to swallow a pill when he gets an ear infection; and Hutch becomes angry with Axl after he keeps driving the Winnebago without permission to Orson to visit new girlfriend April – leaving Hutch without any means of transportation to get to class.

All Katie wants is a good, long nap after the kids keep her up all night. But when Greg gets the flu, she doesn’t get a minute to herself. Her exhaustion reaches critical mass with a confrontation with the school’s officious crossing guard (guest star Kate Flannery, “The Office”).

Eddie shows Emery the ropes on his first day of middle school, revealing that he convinced the teachers and staff into believing fake Chinese customs that provide special privileges at school. Meanwhile, Jessica is thoroughly offended when Louis hires a housekeeper to help lighten her load at home.

We step into the O’Neals’ messy dating lives as Eileen and VP Murray’s secret dating life is about to be unraveled, Kenny jumps into the world of gay dating apps but feels discouraged after not getting enough swipes to the right, and Jimmy goes too far to declare his love for Lacey. Meanwhile, Aunt Jodi meddles with Shannon’s love life after mistakenly thinking she needed her help.

As Ghost Rider’s quest for vengeance brings him into an explosive confrontation with S.H.I.E.L.D., Coulson and Mack must rely on an unlikely ally in their time of desperate need; and Daisy reunites with a familiar face to stop the Watchdogs. Skye and Ben pretend to date when Danielle thinks Skye has a crush on Sean. When Sean’s dad cuts off his allowance, Skye offers him a part-time job at the lodge so he has enough money to enter the regional mountain biking competition. Grandpa Patrick decides to leave the lodge, but before he goes, he gives Skye some of her mom’s old things including her diary which leads to a new mystery.

Forget the debate, and what the first night of Freeform's 13 Nights of Halloween. When a traveling Hall of Horrors show arrives in the town of Danville, a group of high school friends can’t wait to get spooked. The monsters, zombies, and ghouls are completely lifelike; and the villainous showman, Dr. Hysteria, and his enchanting assistant, Lilith, really know how to turn up the scares. But when someone discovers a haunted cabinet backstage that traps the souls of lost teens, it’s up to the gang to stop the mayhem before they are trapped forever.

After three centuries, three witch sisters are resurrected in Salem, Massachusetts, on Halloween night, and it is up to two teenagers, a young girl and an immortal cat to put an end to the witches’ reign of terror once and for all. Hilarity ensues in this fun-filled, family film starring Bette Midler, Sarah Jessica Parker and Kathy Najimy.

GMA: Actress Karla Souza (“How to Get Away with Murder”) Danielle is delighted when Ben’s ex shows up at the lodge and arranges a double date to sabotage Skye and Ben’s burgeoning relationship.

Meredith and Bailey are at odds when both of their patients need a liver transplant, Owen seeks help from the other doctors when he is charged with babysitting baby Harriet for the day, and Amelia struggles with telling Owen some important news

When a surrogate (guest star Sofia Vassilieva) is abandoned by her unborn baby’s biological parents and the fertility lawyer who arranged the surrogacy (guest star Brenda Strong) offers no help, Jake and Julia must race against the clock to find the parents before the baby is born. Meanwhile, Julia worries if a scathing LHL interview is responsible for a tragic death, and Oscar learns the truth about Sarah and Jake’s affair.

The mystery behind the Annalise “killer” flyers takes a surprising twist. Meanwhile, Frank’s troubled past is exposed and a shocking new discovery changes everything about the night of the fire. The Lodge "Winning" (5:00 – 5:30 P.M. EDT on Disney Channel)
Sean and Ben compete in the regional mountain bike qualifiers and Skye and Josh go along to cheer them on. Meanwhile, back at the lodge, Noah and Kaylee hold concert auditions and one of the musicians catches Kaylee’s eye.

It’s Halloween and the Baxter family is excited for their annual party, except for Mike who’s reluctantly tasked with choosing the theme. In hopes of turning everyone against the holiday, Mike decides that maybe if the whole family has to dress up like each other they’ll end up making fun of one another. Eve dresses up like Mandy and Mandy dresses down like Eve, Kristin and Ryan swap roles, and Mike shows up to the party as… Donald Trump!? The impersonating turns into bickering but in the end, the Baxters come together to support Vanessa as she learns that she’s being laid off.

On Halloween, Allison is disappointed the holiday doesn’t seem to scare Dave anymore, meaning her little boy is growing up, perhaps too fast. But that might change after D.K. tells a scary Korean gwishin (ghost) story. The Park family, as well as the gang at Welltopia, bring the story to life playing the various gwishins. Spider-Man puts the Triskelion on lockdown when a mysterious villain begins to take out the heroes one at a time.

On a salvage mission led by Captain Rex, the Ghost crew is captured by a unit of old battle droids determined to fight “one last battle” to end the clone wars. The gang is going to miss out on Halloween because they were grounded after a prank went horribly wrong, so Herman decides to wear all of his planned costumes the week before Halloween. The crew puts a Halloween twist on their pranks with a mysterious buried treasure, pirate zombies, quirky Halloween costumes and a human-sized spider.

When Paige and Frankie hit a writing slump and other bad things start happening to them,  Paige begins to think they are cursed. Meanwhile, Amelia and Dirk are at odds when the lifestyle Diva declutters the Dare Lair.

"Bizaardvark" star Jake Paul and social media sensation Logan Paul take a look at some of the best pranks from "Walk the Prank" and offer their hilarious commentary and reactions.

Eric discovers that he and Danny have more in common than he first believed. The two get closer to finding Liam, but they aren’t the only ones who have been hot on his trail. At work, things begin to unravel when Patrick fails to cover for Eric at a big meeting and then gets swept up in Detective Cornell’s web of interrogation. And just when Eric begins to get some answers, he is confronted by a huge betrayal, leaving him speechless.

The trainees are put through a training drill that tests their stress levels while Alex tries to gather information and get close to Owen. Meanwhile, in the future, the terrorist organization demands a trade, a move that could possibly end the stand-off. 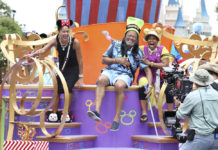