It’s hammer time and Rick Riordan is going to smash your expectations with this brilliant follow-up to The Sword of Summer. In the Magnus Chase and the Gods of Asgard series, we meet the Norse gods and we watch as the young demigods, or einherjar, like Magnus Chase deal with the problems caused on Earth by these mythical Norse figures.

In The Hammer of Thor, Magnus Chase meets up with his friend Samirah al-Abbas for coffee and discusses how the theft of Thor’s hammer Mjolnir could have grave implications. Without his hammer, Thor cannot defend the Earth from a giant invasion, which would bring the Norse doomsday, Ragnarok. They are meeting an informant but Samirah is called away to bring another soul to Valhalla, while Magnus is left to meet the mysterious source. Of course, the informant is murdered and Magnus is left wondering why the assassin killed him and where they go next. The story and our heroes return to Hotel Valhalla, where the einherjar live in eternity preparing for Ragnarok, the final battle at the end of the world. But life is not well at Hotel Valhalla, the newest einherjar has caused quite the commotion. The newest addition to the series, Alex Fierro, has attacked the hotel manager and made a mess of the room provided. What shocks Magnus is that Alex Fierro is a gender fluid transgender character. Alex can willfully change her shape and does not just identify as male or female, but both. Being the child of Loki, Alex is distrusted at first, but soon accepted by Magnus and his friends.

Today when gender identification has caused so much discrimination and hate, Riordan has taken the issue and used his books as a way of educating readers to be accepting of people, no matter how they identify themselves. Magnus Chase is the eyes and ears for readers as he explains outwardly and internally that the transgender identity didn’t bother him. That he has met many kids on the street who were homeless and didn’t specifically identify as one gender or another, in fact this gender fluidity is what resulted in many kids being kicked out from home.

Magnus stumbles as he learns to trust his new friend and as Samirah who is Alex’s sister learns to get along with her sibling, the tension of the story builds. Time is not on the side of the einherjar because in five days Samirah will be married to a giant king and the giants will invade Earth because Thor doesn’t have his hammer to defend against the coming fight.

The journey our heroes go on is what any fan of Riordan would expect. Tasks are completed to gain the favors of monsters and giants galore, until Magnus and his group learn the truth behind the theft of Thor’s hammer. Loki is bad and anyone who has read The Sword of Summer knows he cannot be trusted. The fun with The Hammer of Thor is watching Loki be bad.

As you read along, there is some temptation to compare the Thor. Loki, Odin, and Heimdall of Marvel Comics and movies fame with these characters from Riordan’s imagination. They are very different because Riordan has put his magic spin on the Norse gods.

The story is pretty straight forward and works well in setting up the continuation of the series. Loki continues to thwart the good of others, leading Magnus and crew on misdirection and various stops through the Nine Worlds. We readers have to wait until next October for the third installment of the series, The Ship of the Dead, to be published.

Eleven years ago, The Lighting Thief, was published and the world met Percy Jackson. Now into the third series of books about the Greek demigod, the world can’t get enough of Percy and his adventures. Since Magnus Chase is cousins with Annabeth Chase, Percy’s girlfriend, our story ends with Magnus seeking Annabeth’s help.

As they talk over lunch and Magnus asks for help to survive his forthcoming sea voyage, Annabeth says what every devoted Riordan reader wants, “I think it’s time you met Percy.” I look forward to that meeting.

Riordan has elevated classic mythology with his modern stories that have millions of fans around the world reading about the exploits of the ancient Greeks, Romans, and Norse gods and demigods. His willingness to make his characters reflect the normalcy of today is a credit to his talent, but also his humanity. Whether it is Nico di Angelo coming out as gay, having a Muslim girl like Samirah be the leader in Magnus’s group, or bringing in a transgender character such as Alex Fierro, Riordan will hopefully educate the young and older readers of his books to not hate those who are different. Well done Mr. Riordan, you are certainly doing your part to make the world a better place.

Somehow Rick Riordan goes beyond the standard story. He makes his characters believable with his humor and pop culture references spread throughout the story. Riordan also makes his character applicable to the real world. For example, Samirah is a devout Muslim and asks her friends to protect her while she does her daily prayers. Riordan doesn’t miss the small details and that is why his books are always enjoyable. 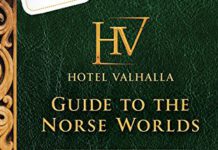