Disney's Palace Pets started as a small toy line, with figures and plushes inspired by some of the company's most well known royalty. But over the past several years, it has blossomed into a successful franchise of its own with nearly 50 characters in the ever growing collection. With a Disney Junior short series, the characters have leapt off store shelves and into the hearts of many youngsters. And now Disney Press is ready to expand Whisker Haven, the land where the Palace Pets live, into a more tangible place with a series of books that are now available. Ariel's kitten Treasure is the star of this deluxe storybook, which features five chapters at an early reader level. The first book in the series expands Whisker Haven by introducing Ms. Featherbon, the concept of glitterbits, and many of the secondary characters. Treasure is one of the core characters and toys of her are not hard to come by, but this book comes with an exclusive, glittery figure and a build-it-yourself boat for her to set in (aka, puzzle). It's a really nice package that will encourage early readers to finish an entire chapter book. And it has a nice message about hard work and friendship. For more details, read our full review. Belle's pony Petite loves to read books, just like the princess she is friends with. In the same fashion as Treasure's Adventures, this storybook finds Petite using her knowledge to solve challenges to break a curse the binds a borrowed crown to her head. She will have to use teamwork to solve the riddle before it's too late and also learns lessons in friendship. With a pony at the center of the story, it instantly draws similarities to Hasbro's My Little Pony series. Another collectable toy comes with this set, although this one loses the glittery texture, and the puzzle creates a wagon for Petite to ride in. For more information, read our full review. Jasmine's tiger Sultan is the only boy on the team of core Palace Pets, which makes this release stand out. The spunky tiger loves winning games, but has to learn the value of good sportsmanship when he loses. And he learns how to be a good friend when one of the other palace pets is embarrassed to admit they're scared. You would never guess that Sultan is a boy from the the way the figure is dressed, but the character is very lovable as you read the story and he comes with a carnival car puzzle. For more information, check out the full review. The first Read-Along storybook in the Whisker Haven Tales series features voices from the Disney Junior series, sound effects, and music to create a fun story about Halloween. Berry is the star of this story and is Snow White's bunny. She loves baking, but gets so caught up baking the Halloween cake that she forgets to make a costume for herself. After receiving costume advice from her friends, she learns to be true to herself and ends up being the star of the annual costume contest. For more information, our full review has you covered.

Ms. Featherbon and the Holiday Helpers Lastly, the Palace Pets are celebrating Christmas early (or Winter Whisker Day, as the case may be). Ms. Featherbon is responsible for delivering presents to all of the Palace Pets and Critterzens of Whisker Haven, but this year there are too many people for her to finish the job. All of the core Palace Pets (Treasure, Petite, Sultan, Berry, Pumpkin, and Dreamy) help make this the best holiday Whisker Haven has ever seen. Another Read-Along book, the CD features some holiday music, like "The Twelve Days of Christmas," to bring the story to life. For more details, read our full review. 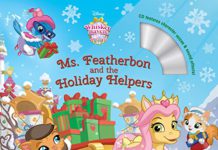 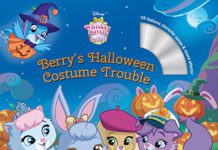