After six years of development, Disney Theatrical’s latest musical, Freaky Friday, is currently in its premiere run at the Signature Theatre in Arlington, Virginia. Following in the footsteps of the novel by Mary Rodgers, 1976 Jodie Foster/Barbara Harris film and 2003 Lindsay Lohan/Jamie Lee Curtis remake, this faced-paced comedic musical follows the body-switching story of an uptight mother and angsty teen daughter on a journey to better understand one another. The show opens on the eve of overstressed mother Katherine’s wedding, which also happens to be the day leading into tormented daughter Ellie’s city-wide scavenger hunt, the social event of the year. After quickly establishing that neither lead character understands the other’s stress, a magical hour glass causes them to switch bodies where they’re forced to adapt to foreign settings and situations. While Katherine struggles to play it cool at school and flirt with the popular Adam, Ellie fails to impress a journalist writing a cover story that could help promote her mother’s floundering wedding planning business.

Both characters gradually begin to figure out their surroundings, learning some of the other’s well-kept secrets along the way. During a parent-teacher conference, the two find themselves in the unusual situation of having to stick up for one another and see how their actions impact the whole family. As she comes to understand her mother’s burden, Ellie confesses to her younger brother Fletcher that parents occasionally lie to protect their children, ultimately causing him to run away from home at the end of Act I.

Thanks to a coincidentally placed hunt clue, Adam recovers Fletcher and brings him home, after discovering his own feelings about Ellie. Following the family’s reunification, Katherine heads out on the all-night scavenger hunt, repairing broken bonds with Ellie’s friends and recovering the missing magical hour glass along the way. Mother and daughter finally switch back to their original bodies in the nick of time at the wedding, with newfound respect and understanding for one another.

With music by Tom Kitt and lyrics by Brian Yorkey, the Tony-winning songwriting duo behind “Next to Normal”, the show is tied together by the “Just One Day” theme, which is expertly woven throughout the production to keep the story moving, while showing how the characters grow along the way. The instantly-hummable song reprises at all the right moments, reminding the audience of the characters’ desires, worries, and needs and how they change as their situations evolve.

Other musical highlights include Katherine pining about not understanding her new setting in “Oh, Biology,” while drawing humorous parallels to the changing bodies of her fellow students and simultaneously dissecting a frog with precision. Katherine and Ellie both discover the other has been keeping secrets, along with fellow classmates and their respective parents in “Busted”, where they learn they’ve been lied to but also decide to respect certain boundaries.

The fast-paced story, with book written by Bridget Carpenter, filled in the moments between the songs with relatable conflicts and lots of humorous moments. Despite the supernatural occurrences, the characters were all believable and their relationships echoed real life. The dialogue seemed very natural and reinforced the differences in the characters’ backgrounds. Although the change was clear when it occurred, the characters had limited introductions in their original bodies before the swap took place, leaving their personalities until later to really develop.

If there was one weak point of the entire production, it would be the end of Act I when younger brother Fletcher runs away. Until that point, he had spent very little time on stage and was portrayed as an obnoxious younger sibling, rather than a sympathetic character moving toward a perilous situation. The resolution during “Bring My Baby (Brother) Home,” when Katherine and Ellie begin to truly sympathize with one another, was one of the strongest moments of the show but the buildup wasn’t nearly as impactful as its ultimate outcome. Heidi Blickenstaff and Emma Hunton excelled in the lead roles. While a body swap is easily achieved with special effects and editing on film, doing it in a live setting poses additional challenges. The actresses were successfully able to trade speech patterns, mannerisms, and even posture to relay the change to the audience. Blickenstaff certainly had the more fun role, with over-the-top fumbles, foibles, and awkwardness, but the subtlety of Hunton’s performance played off it with precision, reflecting her character’s tense, measured personality.

It was also a treat to see the personalities that the ensemble brought to their roles. Any time a large group was on stage, there was always something funny in the background that could easily be missed. Additionally, it was refreshing to see a cast that was so diverse in many ways (age, race, body type, etc.) without feeling like a heavy-handed creative decision; instead, it simply reflected the world that we all live in.

Because this production prioritized developing the right story rather than lavish scenery and effects, the set design was minimal but effective. Four multi-sided pylons were moved around the stage and rotated to imply settings like the family’s kitchen, antique stores, the school hallway, a backyard wedding, and even downtown Chicago. Two turntables were used sparingly to great effect, highlighting dramatic moments without being overdone. While not a dance-heavy show, high-energy choreography was sprinkled throughout, most memorably in the PE class number “Watch Your Back”.

The MAX stage at the Signature Theatre is an intimate venue, with seating for about 260. The small stage’s proximity to the audience helped make a strong connection for what is ultimately a personal and emotional storyline. At times when Ellie broke the fourth wall, she didn’t just speak into the void in front of her, but directly to the audience members mere feet away. Although the show may be performed in a large theater in the future, it would be difficult to maintain the instant bond with the characters before the wacky story starts spinning out of control.

I will admit that I don’t have any particular affinity for the Freaky Friday films, but this production won me over. I’ve probably seen all of the 2003 version, but never in a single sitting, and I don’t think I’ve ever seen any of the 1976 original. This production made some changes to the storyline, but the framework was familiar enough to please fans looking for their favorite moments. The comedic moments translate well to a live format, and the cast made their characters instantly relatable. With musical cues that echo familiar standards like Aqualera do Brasil, Me and Mrs. Jones, and I Will Survive, the energy of the show was infectious and left the audience with plenty of earworms. Overall, it was a very strong debut for a show that I never would have guessed could be adapted to live musical theater, and just generally a lot of fun.

During a Q&A panel following the performance, the actors emphasized that the show is still evolving: scenes, songs, and characters continue to be added, removed, and changed to continually strengthen the story. After a series of performances around the country, including key members of the Signature Theatre cast, the show is expected to be made available for licensing by Disney Theatrical. A Broadway run is not in the plans at this time, though it hasn’t been ruled out entirely.

Freaky Friday runs at the Signature Theatre in Arlington, Virginia through November 20. It will move to the La Jolla Playhouse January 31-March 12, 2017, followed by the Cleveland Playhouse April 15-May 14, and the Alley Theatre in Houston June 2-July 2. 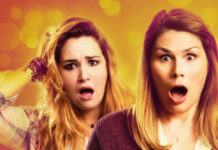 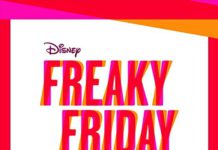