While most of the Disney live-action remakes that have hit the screen so far, including Cinderella and The Jungle Book, have retold classic and well-known films, director David Lowery took on a smaller film in the Disney cannon to reimagine. This past August, Lowery's version of the beloved by decidedly second tier Disney film Pete's Dragon won over several fans of the original while also serving as an introduction to the tale for many. Now his film is available on Blu-ray for even more to discover. FanBoy recently had the opportunity to talk to Lowery about the film, including what it was like to work with such incredible cast, and why Pete's dragon in this version is named "Elliot" and not "Elliott."

FanBoy: Congratulations on the critical, and I think audience, reaction to the film.

FB: I guess a lot of us are wondering, because, you know, Pete's Dragon doesn't necessarily have the same recognition as some of the other films Disney is remaking or retelling these days. Did that give you some freedom to take the basic principle, but tell it in a whole new way?

DL: Yeah. I think that's exactly right. The original movie, I think, is great. I think it's great. I haven't seen it since I was a little kid, but I remember loving it. I know that it has quite a large number of devoted fans. I know that people love that movie. Many of the folks my age grew up watching it, because it was... one of the very first Disney movies on VHS. My co-writer, Toby, was one of those kids. He grew up wearing out his VHS tapes of it. At the same time, it hasn't endured in the way that a lot of the other Disney classics have. It's not one of the crown jewels. It's not one of the untouchable Disney classics. I thought that there was freedom there to tell a new story. If this had been Beauty and the Beast, I would not have done that. If this was Pinocchio, you wouldn't do that. Pete's Dragon felt like there was a degree of safety in re-approaching the concept and re-approaching the material from a new vantage point.

FB: One of the things that kind of made our job here as Disney fans a little bit easier to separate when writing up the original film or your film is you changed the spelling of "Elliot." Was that a conscious decision, or was that just a coincidence?

DL: No, that was not conscious at all. How is it spelled in the original?

DL: I knew his name was Elliot, and I just spelled it the way I thought Elliot was spelled. Completely unconscious on my part.

FB: It's funny, because Disney actually sent us a thing, a picture of the two different Elliot(t)s: One with the spelling of the original, and the spelling of yours, so we wouldn't get confused.

DL: That's amazing. I'm glad they did that. I wish they'd sent it to me.

FB: One of the neat things that I loved about the movie was that you actually made the book that kind of helps build the connection between Pete and Elliot at the beginning of the film. Can you talk a little bit about that, and the role it plays in the film, but also, what it was like to have a role in physically creating a plot device?

DL: Yeah. That was in the script from the very beginning. I always like movies that have characters telling stories in them, and stories, and storybooks, and that kind of thing are important to me. It was something that I included in there early on. Once pre-production began, and we started to get our props together, we realized we needed a book. We wrote a couple pages, and then my brother, Benjamin, who was also a concept artist on the film, we had him do all of the illustrations for it so that we would have a book that Pete could flip through on set, or look at. Most of the pages were blank.

There was probably five or six finished pages that we had on the prop book, but everyone loved it so much that we were asked if we would write the whole thing and illustrate the whole thing. I was incredibly excited to do that. Just to be able to write a book that kids would read. It's meant for young readers who are just learning to read. To be part of that process for whoever might read it is really exciting to me. It was a tremendous honor to get the chance to make a book that will help, kids will learn to discover reading and learn to discover storytelling. I was thrilled by that, and to be able to work with my brother and my co-writer Toby on that, it was just a really fun experience. We want to keep writing children's books now. It was so much fun.

FB: It's a great book in and of itself. Actually, Disney Publishing sent it to us before we saw the movie. We read it. We weren't quite sure what it had to do with anything, and then, I think it really adds a whole other dimension to the movie, because you know what Pete's coming from.

FB: I think that was a neat ... I don't know if it was a happy accident or what, but it was pretty cool.

DL: It started off, we definitely wanted the book to not be a literal representation of what the character is going through, but to reflect. The pages that you read in the movie reflect on the character's experience. Once we got around to writing the whole thing, which was after the movie finished production, we were able to really, you know, tell a story that's unique and not related to the movie, but none the less has a lot of the same themes. They sort of reflect on each other in a really nice, complementary fashion. FB: Now, obviously, you have a fantastic cast, from Robert Redford and Bryce Dallas Howard, and Karl Urban. The heart of the film is obviously Pete's interaction with Elliot, and his connection. Can you talk a little bit about the actor's, obviously, a younger actor being able to act that way with a character who presumably wasn't on set?

DL: The young actors were amazing at it. They really were just able to convince me, through their performance, that Elliot was there on set. It was remarkable. The fact that they were able to do so, it must be because they're younger, and they are more in touch with their imagination. It's funny, because on the Blu-ray commentary track, I did a commentary track with both of the kids, and I asked them, I was like, I told them, "You know, it looks really easy. When I was on set, you guys just felt like you were naturals at this. Was it easy or was it hard to imagine he was there?"

Oona Laurence, who plays Natalie, she said that it was actually really hard, and sometimes she felt silly doing it, and it was a little bit embarrassing, but she just followed it and did it. I told her, "Look, I had no idea. You completely convinced me that this was just the most natural thing in the world. That just speaks even more highly of your acting abilities that I had no idea how hard it was for you to interact with him." They both were just amazing with it. It was really exciting for me to watch them perform with something that wasn't there, because the degree to which they convinced me was incredible.

FB: We're very much looking forward to the home video release on November 29th, but I think, my last question is just, I think Disney fans might not have been exposed to your work before this. What do we have to look forward to, for the people that fell in love with your writing and directing on Pete's Dragon? What's coming up next for you?

DL: I've got a couple films I'm working on. I've got another film with Robert Redford that we're going to shoot soon. It's going to be, it's more of a drama, but I think it will have a lot of the fun that Pete's Dragon has. It's got a nice quality to it. My writing partner, Toby, and I, we are writing the adaptation of the animated Peter Pan for Disney. We're working on that script right now... We're just having a lot of fun with the script, so it's very early. It's a very promising start, at least. I hope people enjoyed this. I hope they seek out my earlier work. Some of it's not exactly appropriate for children, but it all feels very much of a piece. All of my movies feel very similar, so if you enjoyed Pete's Dragon, I think you'll enjoy everything else I've made.

DL: Well, thank you so much. I really appreciate those words.

Pete's Dragon is now available on Blu-ray and Digital HD 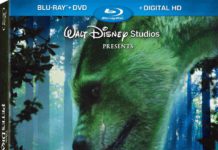