Last June, Disney announced a book series and Lego short series called Frozen Northern Lights, which was delayed from summer to winter. A young-reader novel was published by Random House in July, but Disney Press has joined in the fun with another hardcover book for kids, Frozen Northern Lights: Adventure Notebook. Young Frozen fans can follow along in this handwritten journal written by Elsa, Anna and Kristoff, with help from Olaf and Sven.

The premise of Frozen Northern Lights is fairly simple. Kristoff brings Anna and Elsa to visit the trolls before their Crystal Ceremony. But when they find that the young troll Little Rock still has to earn his tracking crystal, they decide to help him track Grand Pabbie in time for the big event.

The notebook that you hold in your hands is told in first person by Anna, Elsa, and Kristoff. Some of the pages are missing pieces, which were eaten by Sven. And almost all of them feature artwork by Anna (cartoony) and Elsa (elegant). And since the notebook previously belonged to Oaken, it has a few of his invention ideas scattered throughout.

This Adventure Notebook offers a very quick read, but kids who love Frozen are sure to get a kick out of it. In terms of story, there's not much there and this one is likely told best as a 20-page picture book, or in the Lego short format. In other words, it's Disney's way of tiding fans over until the animated sequel, but this one is strictly for kids with little for adults to enjoy.

While Frozen Northern Lights: Journey to the Lights looked like a chapter book for ages 6 to 9, Frozen Northern Lights: Adventure Notebook has no chapter breaks, more pictures, and is aimed at ages 8 to 12. Of the two, this offers the more creative reading experience and a more succinct retelling of the events. It would make a great gift for a young Frozen fan, but with a forgettable story is unlikely to be among any child's favorite books. 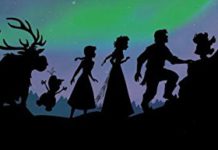