I like to think that magic is real, existing in the form of beans that brew into a potion that brings me back to life every morning. I’m talking about coffee, and I love it so much that I practically die if I don’t have several cups a day. So when I found out that a startup called Trader Sam’s Coffee Co. was making Disney-themed coffees, I could scarcely contain my glee. But then I read about Trader Sam’s Coffee Co. and discovered that this isn’t just coffee with a pretty label. Founded as Smiling Dog Coffee, Erick and Marlene Kanter started their company as a way to help support animal rescues by donating a percentage of their sales. Their charitable contributions have extended to veterans organizations and now Disney fan efforts. For their Trader Sam’s label, a portion of sales is donated to the Carolwood Society, which has preserved the legacy of Walt Disney’s backyard train. In other words, a hearty “KUNGALOOSH!” to the Kanter’s for their brilliant vision, adventurous creativity, and giving spirit. And now on to the coffee! (!!!!!!!). I was sent six different flavors to review and share with you. Another flavor was recently introduced and more will be coming in the future, including seasonal flavors. All of the blends I tried are medium roasts and are made from 100% Arabica beans. I don’t live an organic life by any stretch of the imagination, but if this matters to you all of their coffees are USDA organic, Rain Forest Alliance Certified, kosher, and gluten free.

I have reviewed all six flavors in order from my favorite to least favorite. Obviously, this is all based on my personal taste palette. Now SHOW ME THE COFFEEEEEEEEEE!!!!!! Ghoulish Delight: Cinnamon Bun is hands-down my favorite, and not just because it is themed to “The Haunted Mansion.” I have honestly tried (and failed) to flavor my coffee with cinnamon for years. Using spoonful’s of powder, I usually end up with globs of cinnamon at the bottom of my coffee cup. Meanwhile, my cup-a-joe doesn’t taste anything like cinnamon. Yes, I’m a failure. I will say that I don’t taste the “bun” in this cinnamon bun coffee, but the cinnamon is marvelously rich. I can totally see myself hanging out at the “swinging wake” with a pot of this stuff, rearranging the plates into Mickey shapes to tick off the Imagineers, and playing "Chopsticks" on the organ. The most appropriately themed coffee is also the most unique flavor, Jungle Banana Pie. Who doesn’t love banana? Well now you can love it even more… in your coffee! When it comes to banana-flavored products, you almost expect it to taste like a banana Runt (remember those???). The flavor of Skipper’s Brew is almost a cross between a real banana and a Runt banana… and I like that. This coffee is really appealing. Be sure to get some before it slips out. (Jungle Cruise humor, forgive me!) This was the first one I tried because it seemed like a fitting place to start, and I've gone back to it several times because I couldn't bring myself to split with it. (Ouch!) Grab your pickaxe and hard hat and hop aboard your mine train, ‘cause this here’s the wildest coffee in the wilderness!... Actually, it’s one of the most common coffee flavors in the line, but that’s okay because I still love it! Hazelnut is one of my favorite flavored coffees, favorite flavored creamers, and favorite flavored coffee/creamer combos (you get double hazelnut and you win!!!). It’s a very smooth blend and while the thrill of Trader Sam’s Coffee Co. products is obviously the unique flavors and theming, it’s nice to try their version of a true classic. It's a perfect pairing with Frontierland's toughest back-killer. What flavor would you choose for Main Street U.S.A.? Well, life at the turn of the century was simple, and so is this blend. In fact this one is just coffee, albeit a very tasty cup. While taste testing, I would use this one to cleanse my palette. Since most of these coffees are flavored, I recommend a plain creamer. But the Main Street blend lets you flavor it yourself with whatever creamer your caffeinated heart desires. So grab your suffragettes, crank over your horseless carriage and put on your Sunday clothes to walk down the street and have your picture took. And say “Hello” to Osh Popham for me! Top drawer! Hot dog! The subtitle on this one is “Fudge Brownie.” Personally, I’m not a huge fan of chocolate in my coffee (on the side, yes please), but the chocolate taste is very light and I enjoyed this blend. And yes, it does taste more like a brownie than a Hershey bar, so they got the name right. When I sat at the breakfast table drinking this one, I closed my eyes and pretended I was dressed like Nanook of the North at the top of the Citadel. James MacArthur and Janet Munro were sharing a cup out of blue metal mugs. The brew kept us warm as the icy cold winds surrounded us. And then the yeti came, trashed our camp site, found the coffee, took a sip and calmed down. She (who know it was a girl?) apologized for her morning grumpiness and we all laughed about how now we have no shelter or supplies to get back down the mountain. All the while, the Matterhorn BGM played a whole lot of yodeling... Ooops! I fell asleep and had a nightmare. I need more COFFEE!!! If there’s one blend of Trader Sam’s that I’m not a fan of, it’s Mad Chocolate Biscotti. Now, if I were invited to a Wonderland tea party, you can bet that I would ask for coffee because I don’t like tea (but pass the crumpets, please!). Well that crazy hatter took a stick of chocolate biscotti, stomped on it, and scraped the remains into my cup. The problem with this one isn’t so much the taste while drinking it, which is vaguely chocolaty, vaguely cookie-esque. The main issue is the after taste, which is almost sour and overstays its welcome well into the morning. The aftertaste tastes like the nausea you feel after three consecutive spins on Mad Tea Party. This is the only coffee in the line that I didn't care for. If your level of fandom around Trader Sam's Coffee Co. is such that you need even more, they've got you covered with a line of coffee mugs, t-shirts, and art prints depicting the artwork on each bag. As I mentioned before, a seventh flavor recently debuted called "Plus Ultra Vanilla" and more is on the way. Plus, there's the O-Zell brand of coffees, which benefit the Walt Disney Birthplace Restoration. In other words, if you're a staunch coffee drinking Disney fan, abandon all other brands and switch exclusively to Trader Sam's Coffee Co. Not only can you help support Disney fan preservation efforts and an amazing small business, but you can also replace Folger's with magic in your cup. The real best part of waking up. Because magic is real.* 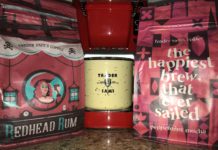 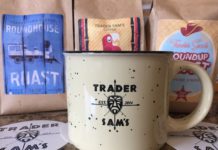