Last February while binge watching Fuller House on Netflix, I discovered that the writer's were paying homage to Disney at a rapid rate. If you missed any moments from last season, you can catch up with our article that chronicled a list of all of them. While season 2 didn't go to nearly the same level of Disneydom, there were still enough nods, jokes, and references to warrant another compilation article. I should caution that if you have not finished your binging, there are a few spoilers to properly set the scene. Now let's begin... Early in the third episode, DJ and Stephanie are discussing their plans for the evening. After saying they should go see Wicked because it’s about sisters, Stephanie tells her to “Let it go.” DJ responds with “Oh! We could go see the Frozen Sing-Along!” For those outside of the Bay Area, this is more than a simple Frozen reference as the sing-along version is often on the calendar of events at the Castro Theater. When Kimmy chimes in that she wants to go out too, she misquote The Jungle Book, saying “The wolf is the pack and the pack is the wolf.” It would be uncharacteristic of Kimmy Gibbler to be quoting Kipling, so she must have seen Jon Favreau's amazing 2016 film.

Later in the same episode, Kimmy and Fernando discuss people who interrupt others during movies. After mentioning a screaming baby at his last movie, Fernando looks at DJ’s youngest son and says, “Tommy, I should not have taken you to Captain America: Civil War.” While both Jungle Book and Cap 3 were among the highest grossing films of the year, Fuller House is produced by Warner Bros. who could have easily swapped the film with Batman Vs. Superman. But they didn't... While Dancing with the Stars jokes were thrown around in season one, more continued in season two. And why shouldn't they? Candace Cameron Burr was a contestant before Fuller House started, but Jodie Sweeten joined in the most recent competition. In this episode, Ramona is auditioning for a dance academy and her judge is none other than Bruno Tonioli. The episode even ends with him being judged. He gets a 10, 10 and a 2, to which he complains "There's always one mean judge." The very end also features a dance with Bruno, Candace and Jodie. After hearing Stephanie’s new song, several members of the family get emotional. Fernando compares his level of tears to that time he cried for Argentina, but Max puts him in his place when he says, “People, pull it together. It’s a song, not Toy Story 3!” And during the music video for Stephanie’s song “The Boy Next Door,” one of the shots shows she and Jimmie sharing a single strand of spaghetti ala Lady and the Tramp. When all of her kids feel sick, DJ tells them she’s not falling it. 8-year-old Max says “I’m not faking. I feel like I did that time I went on the teacup ride after two churros and a turkey leg.”

Later when Kimmy gets chosen to cohost Wake Up America with Danny, she exclaims “Good Morning America!” when she arrives on set, to which he replies “Wrong show.” Later she asks, “Isn’t this fun, Reege?” To which he says “Once again, wrong show.” And at the end, she says “And take a little time to enjoy the view.” Another wrong show, but all of them on Disney-owned ABC. This is likely a nod to Full House's home network, which was a staple of the TGIF lineup for the first half of the 90's. All season long, Stephanie’s new boyfriend Jimmy has been making up cute nicknames for her. In the final episode, he says “I love you, Etch-A-Steph” to which she replies “I love you, Jiminy Cricket.” While the expression "Jiminy Cricket" predates Disney's version of Pinocchio, the expression is no longer in the common vernacular and is now synonymous with Pinnoch's conscience. A fun side note, "Jiminy Cricket" was created as an exclamation to avoid taking the lord's name in vein. Candace Cameron Burr's "Oh Mylanta" is used in a similar fashion. 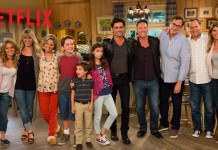 Fuller House is “Everywhere You Look,” So What Should Be Next? 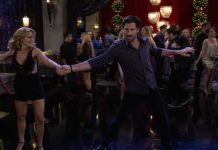 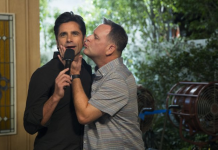