One of my favorite films of 2016 barely made a dent at the box office and, in fact, lost money. But it’s a wonderful, inspiring picture and the lucky few who experience Queen of Katwe will be better off having seen it. If you missed your chance to experience it in theaters, it is now available on Blu-Ray, DVD, and Digital HD.

Queen of Katwe tells the story of Phiona Mutesi, a poor girl from Katwe with little going for her. When a local man, Robert Katende, spends his free time teaching chess to kids on the streets, Phiona discovers her talent for the sport. Against the odds, she begins to compete on a global level, becoming a hero to her people.

Filmed entirely on location in Katwe, Uganda, and South Africa, Queen of Katwe exudes authenticity in every frame. Using mostly local actors, the only big names in the film come from Lupita Nyong’o and David Oyelowo in a cast of unknowns. But you will easily fall in love with each and every character in this film as the story unfolds and will find the entire picture hard to forget.

For a Disney film, Queen of Katwe is kid friendly, but also explores some more mature themes that are a reality to the people of Katwe. It’s all done in such a way that kids won’t notice anything is amiss while adults experience another layer to the film intended only for them. That’s just part of the beauty and magnificence of this marvelous film.

The point that I’m trying to make is that Queen of Katwe isn’t merely another film in the list of forgettable live action Disney movies. It’s more than that, a profound experience that will touch your soul and change your life. And therefore, it’s worthy of at least a rental.

Using the theatrical aspect ratio of 2.39:1, this film looks dazzling in high definition. Fine details and clarity is consistent throughout. The color scheme mostly relies on earth tones, but the occasional bright colors are vivid and lively.

The English 5.1 DTS-HD mix utilizes the full sound field. The lively music fills all the speakers, immersing you in the joyous spirit of the film. Sound effects are expertly mixed to welcome audiences to Katwe via their home theaters. Other audio options include a stereo descriptive audio track, plus French and Spanish 5.1.

The disc opens with ads for Beauty and the Beast (2017) and Moana. Selecting “Sneak Peeks” from the menu plays an additional preview for Disneynature Born in China before repeating the previous previews. The menu features an instrumental version of “Back to Life” with still images from the film that morph into one another.

Queen of Katwe was one of the best films of 2016. With a 92% rating on review aggregate Rotten Tomatoes, I’m clearly not the only one who thinks so. With that, I hope you will give this diamond in the rough a chance to impress you the way it did me. 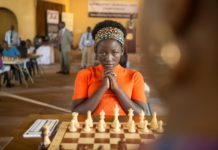