When Lizzie McGuire debuted on Disney Channel in 2001, it became an instant phenomenon and forever changed the network. But to the dismay of many fans, most of the cast have been out of the spotlight for the better part of the last decade. Fans now have the opportunity to help see one of the series' main characters return to the screen with a new film starring Clayton Snyder, aka Ethan Craft. I recently talked with the Disney Channel star about his new project, and his reflections on the legacy and impact of the Disney Channel series that launched his career.

“I think one of the big things about the show is that it tapped into, very comically and honestly, a period of development for kids when there aren’t really any sources to relate to," analyzing why Lizzie McGuire stood out against other kids programs at the time. "No one told me that middle school was going to be terrible. It can be a dog fight of people coming into their own. You have your clique from elementary school and all of a sudden you’re exposed to all these different ways of life and social cultures and it’s crazy... There’s just a lot of confusion, a lot of questions and unfortunately, kids didn’t know how to ask a lot of these questions. So when Lizzie McGuire comes along and it’s like ‘Oh my gosh, that’s kind of what I’m going through and they’re talking about it.’ And it kind of brings things to light, gives kids some confidence about them being unique and not like everybody else and being proud of that." For those unfamiliar, Ethan Craft was the popular, confident, suave, yet dim boy that Lizzie had a crush on in the series. In the early 2000's, Disney Channel had a very strict 65 episode limit for all original series and they, regrettably, waited too long to try and correct the mistake after Lizzie McGuire ended. Fans were saddened to learn that most of the cast had moved on to other things, but the series predated social media, so we all quickly lost track of these actors.

"There were some talks about spin-offs and reboots early on," Clayton recalls, "but I think that everyone’s careers were going off in such different directions at the time that all the pieces just couldn’t quite fit together. I know that myself, I was ready to go into playing water polo seriously in high school, I was on varsity team as a freshman, and that’s where all my friends were. And I knew that if the show continued, I’d probably have to leave my friends at school and have to start doing private school or home schooling. And even though that would have been a great business opportunity, I was very grateful to have the chance to be a kid in school and live that life out.” While many of Lizzie McGuire's principle cast members were educated primarily by the on-set teachers, Clayton was able to continue his public school life in Orange County, commuting to L.A. for shooting days during production. As you can imagine, growing up in the OC came with the perk of having Disneyland close by and Clayton was one of those lucky kids with an Annual Pass. On a recent Reddit Ask Me Anything, Clayton shared an anecdote about being mobbed in Tomorrowland by fans and making the decision to avoid the park, so I needed to find out if he has regained enough anonymity to return to "The Happiest Place on Earth."

“It’s unfortunate that it is kind of a sad story, but at the time I wasn’t thinking of it like ‘Oh, I can’t go to Disneyland anymore.’ It was just kind of a matter of fact thing, like ‘I’ve got to figure out other things to do.’ Which was totally fine, and I don’t want to make it seem like they were bothering me, or that it was a negative thing. I love the fans so much, and appreciate them so dearly, because it’s for them that we do what we do. So I don’t want to make it seem like the fans ruined my opportunity to go to Disneyland as a kid. To be honest, I went so many times. And to put that into perspective of people never getting to go to Disneyland ever, I was this kid in Orange County with an Annual Pass. What am I complaining about? I’m on a show and I’ve been there dozens of times, where’s the tragedy there? But since then, I’ve been able to go to Disneyland several times." It's no secret that the Walt Disney Archives gets first dibs on props and costumes after a Disney production wraps, but Clayton walked away with a few treasures from his days on Lizzie McGuire. “I got a ton of wardrobe that I got to keep after the show, long sleeve shirts and pooka shell necklaces. They were just like ‘Hey, do you want any of this?’ and some of those Ethan Craft clothes were a part of my wardrobe for a good number of years."

You may recall that every episode of Lizzie McGuire ended with a blooper reel, which made millions of viewers wish they could be part of the show. “It was totally a blast! It was just a stellar cast and crew to work with. It was that perfect blend of fun and professionalism where you could laugh through a few takes, but everyone got the job done…. You find a balance of when it’s appropriate to burn a take for a gag. You learn that time is money to the studio, but it’s always worth it when you find that base and that comfort with the team you’re working with." And now Lizzie McGuire fans have the opportunity to help Clayton return to the limelight with a new romantic comedy called A Beautiful Risk, currently in pre-production. "Everyone loves great romantic comedies. They’re so fun to watch, yet we haven’t had one in so long that hit home. We want to make that," he explains. The film follows three successful best friends in San Francisco who discover that their family relationships hold the key to success in their personal relationships. "Something unique about our story is we’re living in a hyper-individualized culture, so to have a story that brings these characters' identity back to their family and see how they relate their love life through that is going to be very refreshing."

Clayton's fans can help make his dream project a reality by contributing to the film's Kickstarter campaign, which conveniently ends on February 14th. "We decided to run a Kickstarter because we want to give tangible numbers to a studio to say ‘Hey, we’ve got this project and we’re not alone in wanting to make this. These are the people that also want to see this kind of movie.'" If you're one of them, you can choose from some great rewards, including a live audio commentary event where Clayton will watch and share never before heard stories about The Lizzie McGuire Movie. “We’re really passionate about this project, but if this is something you want to get behind, it doesn’t matter how small the contribution. We’re really looking for numbers (of backers), so every little bit helps.” Ethan also shared that another Ethan Craft reward will be added to the campaign soon. Personally, I would love to see any of the former Disney Channel stars get another shot at changing the pop culture landscape and I wish Clayton and the entire team behind A Beautiful Risk great success with their project.

For the record, I fully condone outfit repeating. 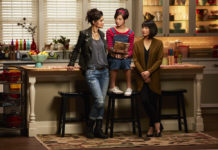 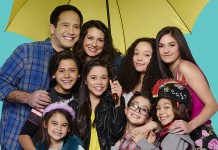 TV Review: Stuck in the Middle Could Be Disney Channel’s Next Lizzie McGuire