One of the coolest things about Toy Fair is that there's a surprise around every corner. When rounding one such corner this year, my inner fat kid about fainted at the sight of Imperial Toys booth. While the company is mostly known for their bubble products, including lots of Disney licensed items (check out their R2-D2 bubble machine!!!). But Disney D-Lectables is unlike anything they, or anyone else, has ever been done before. Kids and, lets face it, adults will go bananas over the kawaii aspect of these Disney inspired desserts. These tiny plastic confections are each themed to a different Disney character and come in mystery blind packs. But wait, there's more! While each blind pack gives you one complete themed treat, they are actually four individual pieces, which you can take apart and restack to create new treats! There are three different types of desserts and 12 characters in wave 1, which is now available. These include cupcakes (Winnie the Pooh, Aurora, Cheshire Cat, Eeyore), ice cream sundaes (Mickey Mouse, Tigger, Belle, Tinker Bell), and ice cream cones (Minnie Mouse, Snow White, Cinderella, Dumbo). Collection 1 is available right now in stores and Imperial already has big plans for more releases throughout the year. You may have noticed Stitch ears in some of the previous photos and he's not a character in this first collection. Packaging for D-Lectibles Easter Eggs for next year show Ariel as another character possibility. You can also see bits of Goofy and Tiana in the jar next to it, as well as plans for guaranteed character packaging, but with bonus mystery pieces. Imperial's future plans for Disney D-Lectables also includes fun ways to play and display your collection. A cupcake cart will let kids become mobile bakers with some themed accessories to help build their stacked treats. And a collector's case that looks like an ice cream cart is sure to be a big draw for anyone going after the complete set.

Similar to Tsum Tsums in 2017, I expect Disney D-Lectables to become the latest craze. There's a lot of potential with this line and they could even go after savory treats down the road as well. Be sure to look out for Disney D-Lectables at a store near you and for more Toy Fair 2017 Disney content, be sure to check out the rest of our articles. 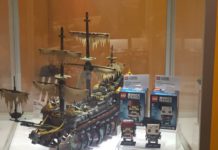 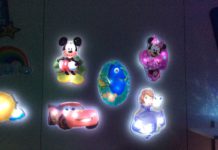