In 2015, Disney Press published an adorable children's book called Ellie about a young elephant in a struggling zoo who uses her artistic talents to save her home. Since then, Ellie became a big success and was even selected as one of NPR's best books of 2015. Two years later, Ellie returns in another story, Ellie in Concert.

Ellie's zoo is doing just fine, but her giraffe friend Lucy is finding their home too noisy to sleep in. Poor Lucy is constantly disturbed by the roars, snorts and grumps that the other animals make, but when Ellie hears bluebird Betty singing her chicks to sleep, she gets an inspired idea. Now she has to figure out a way to turn all of the animal noises into a beautiful symphony so that Lucy can finally get some rest.

Mike Wu returns to this adorable world in this charming sequel. As a Cal Arts graduate and a Pixar animator, Ellie's world feels directly influenced by the watercolor designs that influenced the earliest Disney animated shorts and features, like Dumbo and Elmer the Elephant. He's equally skilled at writing and illustrating and Ellie in Concert is another solid release. Fans can keep up with Mike Wu's personal projects through his website, which even includes some Ellie merchandise.

I found Ellie in Concert to be another charming and inspiring children's book and both titles make perfect bedtime stories. If you play music, there's a surprise bonus as well. The dust jacked can be removed to reveal an actual song inspired by Ellie, and the back of the book features an additional melody from Betty. The score was composed by Andrew Jiminez and while I can't read music, I imagine this arrangement is just as beautiful as this book. 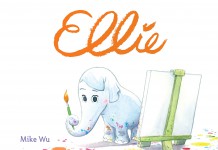