Based on the classic novel by Felix Salten, Disney’s animated version tells an honest story about life, death, love, and the balance of nature that is constantly in play. Bambi is born a prince of the forest and grows up under his mother’s care, learning about the world around him while befriending a loud bunny named Thumper and a shy skunk named Flower. Destined to take his father’s place, Bambi’s upbringing is challenged by harsh changes of seasons, the ever-present danger of man in the forest, and other bucks who wish to challenge is birthright.

Through the supplemental features, viewers can learn about the struggles faced in bringing Bambi to the screen as well as the leaps in animation that were required to pull off the breathtaking visuals. It’s a lost artform that is hard to replicate, even in today’s digital world, and Bambi is a breath of fresh air, now more than ever. Like previous entries in the Walt Disney Signature Collection, this release collects some of the best previously available bonus features while adding a few new features.

The legacy of Bambi is significant and its place in animation history is critical. It was the last feature produced in the first golden age with feature animation production halted by a combination of World War II and an animation strike that forever changed Walt Disney’s relationship with his artists. For these reasons alone, animation and Disney fans should consider Bambi a must-own. Fans of the modern era of animation should also give it the credit it justly deserves, for The Lion King is essentially Bambi in Africa with a little Shakespeare thrown in for good measure.

This review covers the Blu-Ray/DVD/Digital HD combo pack. It makes its debut on the latter format, with this being the 2nd Blu-Ray release and third outing on DVD. Current owners can decide for themselves if a rebuy is warranted based on the following specifics of this release, while those who don’t currently own the film are encouraged to get this version on Blu-Ray or digital as it is the most complete release thusfar.

Bambi’s Signature Collection features the first physical bonus in the series in the form of a “lithograph” celebrating the life of Tyrus Wong. This sturdy matte finish card is slightly smaller than the inserts inside the case and features concept art of Bambi meeting Thumper by legendary artist Tyrus Wong. The back of the card is black and says “In loving memory Tyrus Wong 1910-2016.” The back features a pop-out stand in case you want to display it on a shelf.

Digital Exclusive - The digital copy included comes with all of the bonus features listed above, plus an exclusive:

The included DVD disc doesn’t contain any bonus features, only the film.

What’s missing? Off the Diamond Edition, we lose the Disney Second Screen app connectivity and interactive galleries, in addition to the Big Book of Knowledge game. From the Platinum Edition DVD, a Patrick Stewart introduction to Walt’s Story Meetings is absent, a feature about the 2005 restoration, a Disney Time Capsule on 1942, four games and a virtual forest.

This re-release of Bambi uses the same video transfer and restoration from the 2011 Blu-Ray release, but with one modification. The modern Walt Disney Pictures logo has been replaced by the original RKO title card, thus restoring the film to its true original theatrical version. The restoration is glorious with all of the amazing artwork presented in vivid detail. Colors are soft, as was the design intent, and the balance is well blended. The included DVD reveals a slight loss of detail and the color spectrum feels slightly compressed.

By default, the film is presented in English 7.1 DTS-HD High Resolution audio on Blu-Ray. Other audio options include the Restored Original Soundtrack (mono), plus French and Spanish 5.1 surround tracks. The surround mix stays mostly in the front speakers, with score elements and occasional sound effects filling the rear. The DVD presents these same audio options, but substitutes the 7.1 English mix with an English 5.1 track.

Bambi is housed in a standard Blu-Ray case with both discs attached to the interior of both sides (no disc art, but the Blu-Ray uses a darker shade of blue than normal). Inserts include the previously mentioned Tyrus Wong lithograph, a digital copy/Disney Movie Rewards code, and a flier for Disney Movie Club. The case fits inside a foil embossed slipcover and the style matches the previous Walt Disney Signature Collection releases.

The menu is reminiscent of Snow White’s Legacy Collection release, with paint strokes revealing a mix of Tyrus Wong concept art and scenes from the film set to score from “Love is a Song.” Both discs open with trailers for Cars 3 and Beauty and the Beast (2017). Selecting “Sneak Peeks” from the main menu plays an additional ad for Disney Movie Rewards before repeating the first two previews.

The Walt Disney Signature Collection release of Bambi is the most completed to date, finally restoring the original RKO title card and offering the most relevant classic bonus features, plus a few new ones. While this release may not give current owners many reasons to upgrade, anyone who doesn’t own Bambi yet is strongly encouraged to pick up this winning release. 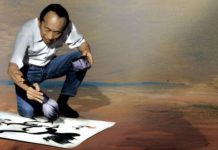 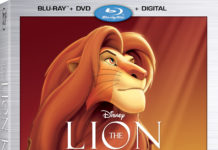 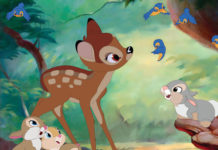