Newsies followed an uncharted course over its 25-year history. From box office bomb in 1992, to high school theater geek cult classic, to a 2012 surprise Broadway hit, successful tour, and now coming full circle with a filmed version of one of the show’s final performances. Originally recorded for a theatrical Fathom Event engagement (and primarily to help sell the licensed show to local theaters), the theatrical engagement was so successful it extended its run and shortly after, a digital release was announced for May 23rd.

Now available from all major digital platforms, including iTunes, Amazon and Disney Movies Anywhere, Newsies: The Broadway Musical can now be yours to watch again and again. So “Seize the day” and call all your fellow fansies to plan a viewing party. Don’t forget to stretch before attempting any of these high kicks!

I was lucky enough to see Newsies: The Musical three times on stage, once on Broadway during its initial limited run (newsflash, it got extended), and then twice on tour including a final time during its Pantages engagement in Los Angeles where this show was filmed. While the tour was nearly identical to the original Broadway version, it was impossible to fill the large shoes left vacant by Jeremy Jordan as Jack Kelly. Thankfully, Disney Theatrical reassembled all of the original Broadway leads for this filmed version. All of the performances are absolutely incredible.

If I had to recommend just one version of Newsies to an interested party, I can say without hesitation that it would be this version. The changes made to the story, songs, and characters make for a more solid experience. The staging, singing and choreography are far superior in the stage version and the only thing that gives the original an edge in retrospect is the fact that it was filmed on realistic looking sets and backlots instead of on a stage with limited scene changes.

Alan Menken reunited with lyricist Jack Feldman to expand the songs and added seven new tracks, some of which completely replace the weaker numbers from the source material. Writer/Actor Harvey Fierstein is the genius behind the script and story changes that made a decent film into an excellent show. “Santa Fe” becomes more impactful in this version where it opens the show, followed later by a heartbreaking reprise. Many of the songs have also been enhanced with added/revised lyrics and in the case of “Once and For All,” a whole new counter melody. So many of the songs are literal show stoppers and this filmed production lets you soak it all in with (shortened) audience reactions after many of the numbers.

If you’re a fan of Alan Menken, the original Newsies, or musical theater in general, you deserve to see Newsies. While seeing a live show is always better than a filmed version, this is an excellent substitute for the real thing and I fully support Disney Theatrical filming all of their amazing productions (except for the bastardized touring version of The Little Mermaid). If you feel the same way, you can help support the cause with this release of Newsies.

Expectations were that this release would merely be the movie and nothing else, but Disney surprises and delights with a few bonuses. First up are three viewing options:

Then there are behind-the-scenes bonus features and song selections.

Newsies: The Broadway Musical is presented in HD and looks fantastic. The show’s color palette uses a lot of blue lighting, but as you would expect also features a lot of black space. I was unable to detect any signs of aliasing or other video issues while viewing the iTunes 1080p file through an Apple TV.

The 5.1 surround sound English audio track places lots of audience reaction sounds and score in the rear speakers. But as if you were seeing this in a real theater, all of the dialogue comes from the front channels.

Newsies: The Broadway Musical is the only way to see the phenomenal Broadway production in its original form. While you can be sure a local production will be coming to a city near you in the future, it would be hard to recapture the lightning in a bottle that was this version. Reassembling the original Broadway cast, there’s no better way to see it short of finding a time machine and attending a live performance. 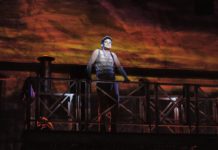 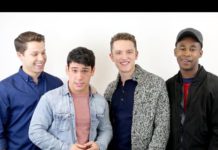 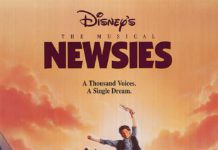