The second DVD release of Mickey and the Roadster Racers separates the Minnie’s Happy Helpers segments from the racing adventures. It’s an interesting decision, yielding a release that is barely over an hour. But Disney is clearly aiming this release at kids who enjoy the antics of Minnie Mouse and Daisy Duck, but perhaps aren’t thrilled by the racing adventures they go on with Mickey and the gang.

The segments on this disc are previously unreleased on DVD and come from episodes four plus six through eleven. First up is “Egg-Xasperating!” where Minnie, Daisy, Pluto and Cuckoo-Loca take a job for Clara Cluck babysitting her unhatched egg. But when the egg begins to hatch, they go on a wild goose chase to find Clara and get her home in time to meet her baby chicks.

“Happy Hula Helpers!” finds Minnie and Daisy in Hawaii, where they help a young girl create a special hula for her grandpa’s birthday present. The travel theme continues in “Tea Time Trouble!” when the gang goes to London. When Big Ben stops ticking, Minnie and Daisy help fix it to save tea time.

Back in Hot Dog Hills, Minnie and Daisy have trouble making and delivering a birthday cake in “Happy Birthday Helpers!” The girls find out what it takes to run a hotel when they accept an assignment in “Bed, Breakfast and Bungled!” and even need to recruit Clarabelle Cow to help them. Lastly, when Mickey and Goofy go fishing together, the rest of the gang feel a little left out and catch some fish of their own in “Gone Fishin’!”

While the DVD packaging would lead you to believe that the content is 100% girl centric, Mickey, Donald and Goofy actually get quite a bit of screen time. Best of all, the helping theme can be used to motivate your kids to help with chores or even do simple things like putting away their toys. If your child loves both halves of Mickey and the Roadster Racers, then they’re sure to love this release. Since Disney has bisected these episodes, I’m curious if the other halves will end up on a future racing themed release.

There is also a physical bonus, described as a “Magnetic Helper Chart.” This fold out magnet allows you to write your child’s name at the top and features a list for up to six tasks. A separate magnet sheet features punch-out stars that can be used the check off each item once complete. Just make sure you use a dry erase marker if you want to wipe it clean to change the list in the future.

Minnie’s Happy Helpers comes in a standard black DVD case, which fits inside a holographic embossed slipcover. Inserts include the Magnetic Helper Chart, which is sealed in plastic wrap, a code for 75 points through Disney Movie Rewards, and a flier for Disney Movie Club.

This release uses Disney’s Fast-Play, which automatically plays all of the contents without having to load the main menu. If you let it run its course, it opens with an ad for Pixar’s Coco before playing the seven episodes. After the episodes, it plays additional ads for Disney Movie Rewards and Puppy Dog Pals. You can also skip Fast-Play and go straight to the main menu, which plays music over a static image of Minnie and Daisy racing (which they don’t do in these episodes).

Minnie’s Happy Helpers offers half the fun of seven episodes of Mickey and the Roadster Racers. It’s perfect for the little Minnie and Daisy fans in your life and comes with a bonus helper chart that can be used to help encourage them to do household tasks, such as putting away their toys. 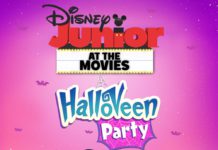