The new Art of Coloring: The Nightmare Before Christmas was releasedon July 18th. Boasting "100 images to inspire creativity," it mirrors the style of the previous Art of Coloring soft cover releases.

I enjoy The Nightmare Before Christmas, but would not consider myself amongst its biggest fans. However, I was really excited for this release as I love Halloween and Christmas and was hoping this would offer coloring opportunities between the two holidays. Unfortunately, the first disappointing aspect of this release is that just two pages feature Christmas and only in the form of presents. There isn't a single image of Sandy Claws anywhere in the book! Not even an image of Jack holding up a string of Christmas lights! What's this? WHAT'S THIS?!?!?

Beyond that, this is hands down the least colorful coloring book ever made. So many of the characters prominently featured are almost entirely black and white. Jack Skellington is the primary character and oftentimes the pages he's on leave no opportunity for color. One of the most frustrating images features his silhouette against the black hill with solid black pumpkins at the base!!! You literally can't color the pumpkins!!! They even chose a similar image to display on the front cover!!! They say to never judge a book by its cover, but if you can't color this cover, but this one shows you exactly how limited the potential of this release truly is.

There are an ample amount of images of Sally and her pages offer the most amount of coloring fun. Another weird choice, though, is that there are just two pages of Oogie Boogie, yet over a dozen of Lock, Shock and Barrel. Oogie Boogie's neon casino demanded to be part of these pages and its absence is a real curiosity. The only other characters that make occasional appearances are the Mayor, Zero, and Dr. Finkelstein, all three nearly entirely black and white. The Nightmare Before Christmas has so many fun and colorful side characters, like the witches, the lake monster, and the wolfman. Why aren't any of them in this book???

The collage pages also require you to either use some crazy colors or just leave them as is. Brilliant coloring choices like bones, skulls, tombstones, bats, and the Halloweentown gates are featured on repeat. If you're a fan who wanted this to just stare at some nice black and white images, then by all means pick it up. But anyone who wanted to actually color in it will find that Disney Press took care of most of the work for you. So walk, don't run, to pick up your copy of the world's most impossible to color coloring book, Art of Coloring: The Nightmare Before Christmas. 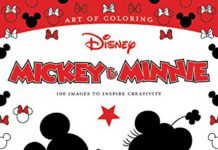 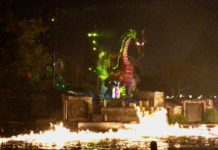 25 Years of Fantasmic! – A Look Back and a Review 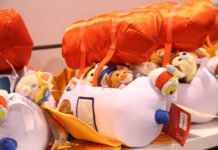