Lauren recently had the opportunity to speak with composer Jacob Yoffee who has worked on the trailer campaigns for a number of juggernaut films, including Star Wars: The Force Awakens, Rogue One: A Star Wars Story, Pirates of the Caribbean: Dead Men Tell No Tales, and Disney’s The Jungle Book. However, most recently, he’s broken into the world of television composition. Jacob is the composer for the newest Disney Channel series Andi Mack from the creator of the hit show Lizzie McGuire. Jacob: Oh yeah, big difference there. Both those projects can last months. Both projects, of course, the clients are wanting the best product. I'd say for a trailer campaign, you might have hundreds of millions of dollars at stake if a movie fails so every second of the music is critiqued and analyzed and debated over, and you're doing tons of revisions, and it's gotta be approved by many many many people, all up and down the latter for various studios. It may be based on franchise themes, and melodies, and pieces of music, and they have songs that they might have licensed for the campaign, so there's a lot to fit into anywhere from 15 seconds to 3 minutes that you're really trying to work with any sort of sound.

Say, for instance, Pirates of the Caribbean, you're dealing with a gigantic orchestra: brass, strings, electric guitars, drums, choir ... That whole thing, whereas on a TV show, Andi Mack, for instance, I'd say that a lot of the cues can be a very small ensemble, it might even just be a solo acoustic guitar, could be a piano with some strings or it could be a full on rock band, guitar, bass, drums and stuff like that. But it's more about, "oh does it work for the scene?" and you're watching the scene and the music needs to not get in the way. It needs to just help push it along, create some forward momentum and have energy. But it's very different in trailers where the music often is driving everything, so if it's not right, everything comes tumbling down.

Lauren:  Well it sounds very intense and I imagine you're working with themes that have already been set throughout. For instance, with Pirates there are lots of themes that you already have and that you've got to incorporate. I can't even imagine.

Jacob: It's fun though!

Lauren: And along those lines, which Disney trailer campaign has been your favorite and why?

Jacob:  I would say — well, first of all, that's hard to answer totally. I've enjoyed the Star Wars properties the most just because the music for those films is so rich and it really comes out of the great repertoire of classical music. When you think about it, I think John Williams is just an incredible mind. It seems like he's got an almost encyclopedic knowledge of orchestration and just lyrical melodies seem to pour out of him. Even being able to work with any of those themes and try to submit music for these campaigns is just a dream come true.

And it's kinda crazy cause a lot of film composers I think they ... A lot of people say, "oh why'd you wanna be a film composer?" Star Wars, John Williams ... Everyone says Star Wars. I was sorta late to the game. The movie that made me wanna do this was Gremlins. I always liked Star Wars but I didn't really hit me until much later in life. I've been educating myself over the last few years in a huge way to dive into the Star Wars music.

Lauren: Well, we did a little bit of research. We have found out that you have a very strong background in modern jazz. So how do you utilize your jazz background when you're composing?

Jacob: When you first start performing jazz, the most difficult thing is this concept of improvising. You're on stage and everyone's expected to compose instantly in the moment. It has to sit within the structure of the song. If you're playing a blues, you're playing tunes by Miles Davis, Charlie Parker ... There are set chords that people will follow, and of course, it changes wildly how people decide they want the music to go but the bottom line is you have to in the moment produce music and it's really exciting, very challenging. It pushes you in ways that playing pre-composed music doesn't. Just differently. I don't want to say one's better than the other.

But I remember thinking, "oh I love composing as well." One of the things I love about composing is I have time. I can think about an idea and then sit and develop it and make it better, and then submit it or play it for people after I feel like it's perfect. The crazy thing is once you start entering the realm of film music, you don't have any time! It's almost like being on stage, playing jazz, and you have to compose so quickly that the improvising skills I picked up in jazz have been crucial to making a living doing what I'm doing because if I have to write a cue in 5 minutes, in 10 minutes, in an hour, in half a day, whatever it is, I can really come up with musical ideas I think much faster than I could before I had studied jazz. Lauren: Touching back on Andi Mack, it's been renewed for a second season. What is something that you enjoy or what is one of the things you enjoy most about composing for Andi Mack?

Jacob: I'd say the energy level of the show is what excites me most. When you're scoring sometimes more adult, dramatic content, especially the sound of shows today, a lot of the music has to be very subtle. It has to be almost like you don't realize that it's there, and it has to ... You don't really wanna push people's emotions. The idea is we want the music to be slightly ambiguous so that the audience can choose to feel what they wanna feel without being led. In some ways, that really kinda restricts the music in a way that you can't really be as bold as a lot of film music that we all love, it's very bold, it makes a strong statement. You think about the music for James Bond. That is in your face. So Andi Mack, I love it because it allows for a lot of bold movements in the music. I can have a really strong guitar riff, I can have a really fast paced, loud tops track that I kinda come up with, I can have these really strong melodies ... And when it's emotional, I can go for that emotion and really support it because on screen, they're going for it as well. I feel like just the energy of the show, it just pushes and pulls very strongly in all the directions that it hits, which makes the music that much more fun.

Lauren:  Have you become invested in the characters, and if so, how does that help you write individually for each character?

Jacob: Absolutely. I think you're watching these characters develop and you're watching these young actors grow up on screen, in a way. You see them in these positions and your heart goes out to them when you imagine, oh what would happen if I was in that situation. I remember feeling like that. You become very invested, and when I'm working on these scenes, I'm watching them over and over and over and over and over again, so when they're emotional, it's times a million for me cause I'm reviewing it time and time and time again and trying different music and trying to underscore it. In a way, I feel it, it's more magnified for me when I'm feeling these emotions. I'm right there with them, watching, like okay I'm gonna make this note happen right when Andi breathes in, the moment right before she says a line. Cause you're really playing with the performance that the actors have given you on screen and I'm incredibly invested not only in the show being well, but I really want each of these characters to get their full potential. I wanna mind every bit of emotion I can get from each scene.

Lauren: That's awesome. Awesome, well Jacob, that's all I have for you today, but thank you so much for your time, and from all of us at Laughing Place, including myself, we wish you the best of luck and we really can't wait to hear more of your work on the second season of Andi Mack. 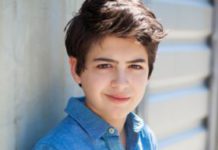 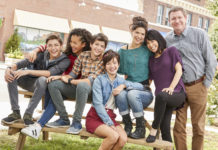