The bi-monthly Funko subscription box, Disney Treasures, returns for its third destination. This time we've arrived in Tiny Town, where the smallest Disney characters have found a safe place to live. With no further ado, let's crack open the crate and see what's inside!

After lifting the lid, we find a shallow compartment that holds the patch and pin. The patch features Dot from Pixar's a bug's life and she will join the previous patches for the final image they combine to form. The pin stars Gus from Cinderella.

Underneath the fold, we find the three exclusive figures, map, and sticker.

Once again, the map unfolds to give more information about each figure, including some character trivia. The back of the map reveals the next destination, the Haunted Forest, which promises Maleficent and The Haunted Mansion themed items.

The first figure we will explore is a floating Tinker Bell Pop! Vinyl figure (the second Disney Tresures exclusive from Peter Pan). Her clear base is a sparkly pixie dust trail and she has her wand out, ready to light the fireworks above Sleeping Beauty Castle.

Pinocchio's conscience, Jiminy Cricket, is the star of the Mystery Mini and Collectible Tin for this release. The tin features wonderful artwork of Geppetto's workshop and the figure is adorable. I just wish he had his badge on, since he's in his finely mended suit from the end of the film and not his hobo rags.

Lastly, the second Dorbz Ridez figure in the series brings it's a small world to life. Figures of kids from Holland and Mexico are safely seated inside the blue boat, but can be removed and their heads can be turned in any direction.

Thus concludes our visit to Tiny Town. While it is too late to get this crate, fans interested in signing up for the Haunted Forest crate can do so at Funko's official website. I'm excited to see what wicked goodies are in store in October's crate. 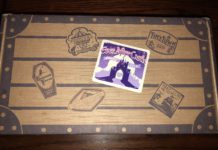 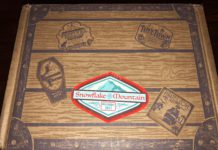