Following the overwhelming success of its first retail outlet in Shanghai, Disney Store has opened its second location in China. According to visitors, the new shop does not disappoint with a unique Disney experience and locally designed and exclusive merchandise. The moment a guest arrives at this Disney Store you realize you are stepping into a special experience. A large LED screen at the entrance of the store will greet and entertain guests with Disney stories and characters from across all Disney platforms from the classic Mickey, Minnie and friends, to Pixar, Star Wars and Marvel's Iron Man, Spider-Man, and Captain America just to name a few. Classic Disney music will fill the air setting the mood for the total shopping experience.

When the portal to the new Shanghai Disney Store opened, it ushered in a China-exclusive high-end fashion collection of bags called M28 Mickey Collection. Featuring a black theme color and Mickey's iconic white gloves as the central design element, the bags represent Disney's push into high-end fashion in China.

To promote the opening of its second location, Disney has partnered with Shanghai-based bike sharing pioneer Mobike in a promotion offering guests a fun-filled Disney themed bike riding experience and the chance to enter a contest for special Disney gifts. Users of the specially designed Mickey and Minnie Mouse bikes will also be able to use discount coupons at the store on Nanjing Road. Once inside the store guests can't stop noticing a ceiling to floor wall of Metallic Mickey Mouse. Disney Store is offering a two-week promotion featuring an exclusive Golden Metallic Mickey Wall with 888 limited-edition metallic colored Mickey Mouse plush key chains.  Why 888 plush key chains you asked? In Chinese numerology, the number 8 is considered extremely lucky. So the use of 888 stands for triple lucky.

Disney Store's second Shanghai outlet is located at the HKRI Taikoo Mall, located in one of the city's most vibrant shopping and entertainment centers. In addition to its flagship store in Shanghai Lujiazui, Disney operates two online stores at Tmall – Disney.tmall.com and disneyfashion.tmall.com. Disney Store Shanghai opened its first and largest shop in China in May 2015. 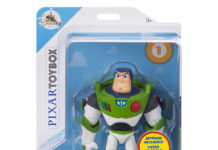 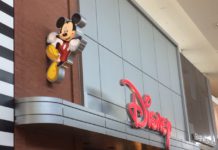