Of all the new shows on ABC last fall, there's just one that kept my attention for the entire year: American Housewife. At first glance, it looks like a twist on the 80's family sitcom full of narcissism and sass, but it's a lot smarter than that. Each episode builds to a satisfying conclusion, with clever setups along the way leading to hilarious outcomes. But what's more, the characters are relatable and through their faults, likable.

Before diving in to the season two premiere, I want to share my favorite joke from season one. When trying to get their youngest daughter,Anna-Kat, to do something she doesn't want to do, her father Greg (Diedrich Bader) promises to take her to the Disney... That's when Katie (Katie Mixon) butts in trying to be the star parent and says "WORLD!" Greg looks at her shocked and whispers "I was going to say store." Reconnecting with the Otto family this season, Katie has a master plan to get out of a crazy commute that involves driving across town multiple times each day to get her kids to all of their after school activities. With their oldest daughter Taylor on the brink of getting her driver's license, Katie can't wait to take up hobbies like sitting in the bath drinking wine. But when Taylor reveals that she isn't going to college, Greg wants to withhold Taylor's drivers license as a motivator... and Katie is having none of it!

In typical American Housewife fashion, there's a joke in this episode that gets setup early on, but has an even more hilarious payoff for those paying close attention near the end. Katie's past also comes back to haunt her in a major way. When Anna-Kat refuses to participate in any after school activities, Katie's plan of having Taylor drive everyone all the time falls apart. In order to get her daughter to be more outgoing, she has to volunteer at school functions with the same healthy trendy moms she spent last season mocking. A lot of sitcoms hit a sophomore slump and last year, I watched a promising show (The Real O'Neals) stumble and fall in its second season. If the season two premiere of American Housewife is indicative of the rest of the season, fans should have no reason to fear. It returns just as sharp and witty as it was before. And as proof of ABC's faith, it moves from Tuesdays to the prime Wednesday night comedy block alongside The Goldbergs, Speechless and Modern Family. Boom!

If you aren't already watching American Housewife, here's what you need to know. Greg is a brilliant professor and his wife Katie doesn't fit in with the athletic and trendy moms in their snobbish East Coast town of Westport, so she rebels through snark. The two oldest kids fit right in and often try to hide the fact that they are considered poor where they live, despite their upper middle class means. And the bottom line is mama Katie isn't having any of it, so look out Westport and look out kids!

In a world where weekly television series' have to compete against streaming platforms like Netflix, it's easy for shows like American Housewife to get lost in the shuffle. But what is clear to me is that this show has the power to stand up against the competition and you should tune in or at least add it to your Hulu watchlist. It's guaranteed to be one of the funniest half hours of your week. 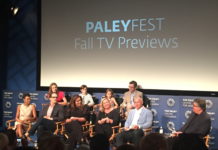 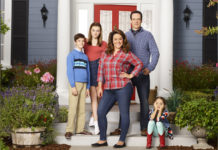